Forward who arrived on a season-long loan from League One side AFC Wimbledon in July.

The 21-year-old, who came through the academy ranks at Colchester United after being at West Ham United as a schoolboy, will wear the number 11 shirt for manager Andy Hessenthaler’s side this season.

He joined the Dons earlier this month after impressing their manager Mark Robinson while spending time with his club at the end of last season. Dover’s suffered FA Cup heartbreak after losing on penalties at a wet Huish Park on Saturday.

With both sides successfully converting a total of 13 times from 12 yards, Marshall Wratten saw his spot kick saved by home keeper Adam Smith in sudden death.

Andy Hessenthaler’s side had twice fought back to level the scores during an end-to-end affair.  Rhys Murphy scored an early brace, but Louis Collins’ quick-fire double had Whites back on terms at the break.

Joe Quigley headed the Glovers back ahead just after the restart, however TJ Bramble prodded in Whites’ third of the match shortly after the hour mark to take the game to penalties.

The shootout defeat saw Dover fail to reach the first round proper of the FA Cup for the first time in three seasons, though it looked like their exit from this season’s competition was to be confirmed much earlier thanks to Murphy’s early double.

The striker rifled a left-footed shot into the bottom corner and soon after Josh Staunton had headed against the post, Murphy grabbed another, stabbing in a corner from close range to leave Whites staring at a fifth consecutive loss.

The visitors rallied, with Josh Passley’s rampaging run and pass finding Collins to finish neatly at the far post.

Hessenthaler’s men then struck again with half-time looming as Collins grabbed his second of the match, poaching on Marvel Ekpiteta’s looping header across the goalmouth.

There was still time for Tom Smith, making his debut for Dover following a loan move from Premier League side Arsenal last week, to turn Gabriel Rogers shot around the post.

Smith was at it again after the restart by saving Quigley’s strike, but Dover’s stopper was powerless to stop the burly striker heading in Dan Leadbitter’s cross.

Yeovil continued to attack and Lawson D’Ath was left frustrated as Smith tipped his goalbound shot away for a corner.

Smith’s namesake at the other end was then called into action, blocking from Collins at the far post.

Collins then turned creator for Bramble, heading across the box for the midfielder to slide in Whites’ latest leveller.

Rogers almost won it from the glovers, only to be denied by Smith once again.

But it was Adam rather than Tom who stole the headlines in the shootout, saving the crucial penalty to send the Somerset side through to the next round of the cup.

Earlier, Hessenthaler made five changes to the side that started the 2-0 defeat at Torquay last week.  Bilel Hinchiri, Collins, Wratten and Smith replaced Ade Azeez, Steven Rigg, Yusuf Mersin and Sam Wood who were named as substitutes.  Ekpiteta also returned in place of the injured Will De Havilland.

Whites next host Eastleigh in the National League on Tuesday 27th October, kick off 7:45 pm. 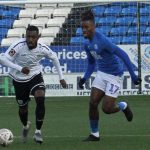 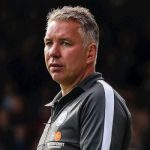