Ade Azeez fired Andy Hessenthaler’s side ahead just after the break, but two quick-fire goals saw Whites knocked out at the First Round proper stage for a second consecutive campaign.

Charlie Cooper’s penalty levelled matters from the penalty spot with twenty minutes and the turnaround was complete three minutes later when Slavi Spasov headed in the winner.

The game was Whites’ first in four weeks following positive COVID-19 tests at the end of November.

Kurtis Cumberbatch sent a free-kick straight at home keeper Craig Ross, with Dave Tarpey stabbing into the side netting from close range at the other end.

Spasov then dragged a volley wide of the mark and Bayli Spencer-Adams was on the line to block  Saul Shotton’s goalbound drive.

Ahkeem Rose’s spectacular overhead kick forced Ross into a smart stop and Azeez then fired inches wide from a corner.

Cooper nearly had the home team ahead on the stroke of half-time with his speculative 25-yard volley whizzing inches past it’s intended target.

It was the away side who were in front just after the restart when Azeez crashed in Rose’s pinpoint cross following the Jamaican striker’s fine run.

However, the lead was short-lived as Woking levelled from 12 yards after TJ Bramble was adjudged to have felled Koran Lofthouse in the area.

Azeez’ late shout for a penalty following a shove in the box fell on deaf ears as Hessenthaler’s men suffered a fourth consecutive match defeat. 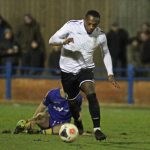 Whites were knocked out of the FA Trophy on penalties following a 2-2 draw at the Walks Stadium against the current National League North leaders.

Despite trailing at half-time on Saturday afternoon in freezing temperatures, Athletic fought back to lead the first round tie until injury time.

Sam Kelly fired the home side ahead in the first half, but goals from sub Jai Reason and skipper Kevin Lokko had seemingly completed an impressive turnaround against a side unbeaten at home since October 2018.

However Aaron Jones preserved Linnets’ record deep into injury time, firing a free-kick into the bottom corner to send the game into extra time.

And with no goals in the additional 30 minutes, the match went to a shootout, with misses from Steven Rigg and Kurtis Cumberbatch seeing Whites miss the chance to go into Monday’s second round draw.

The tie had moved into extra time after both sides agreed to decide the game on the day and avoid any midweek replay.

The first chance of the game fell the way of the hosts when Michael Gash headed Ryan Hawkins’ cross over the bar.

Anthony Jeffrey sent a 20-yard strike wide of the mark in a scrappy opening 20 minutes.

Will De Havilland’s header from Nassim L’Ghoul’s cross was too close to home keeper Alex Street.

Adam Marriott then somehow skied over with the goal gaping after away keeper Yusuf Mersin had denied Ryan Hawkins.

There was then confusion when the home side had a goal controversially disallowed.

Gash sprinted clear on goal and despite the linesman raising his flag, the referee waved play on with the Linnets’ striker going on to fire home.

Dover players protested, prompting the main official to speak to his assistant and the goal was finally disallowed.

Athletic boss Hessenthaler was also shown a yellow card amidst the protests.

Rigg then his struck the underside of the crossbar from another L’Ghoul corner and King’s Lynn did go ahead just before the break.

Aaron Jones’ low cross was not properly dealt with by the Dover defence and the ball fell for Kelly to fire in from close range.

Lynn almost doubled their lead before half-time as Marriott forced Mersin into a smart save and Kelly lashed wide from the edge of the area.

After the restart, Mersin’s wild slice almost let in Gash, but the striker could only strike the outside of the post from a few yards.

Whites were level with 18 minutes remaining thanks to one of their substitutes.

Reason lofted the ball into the net after Street had fumbled Jeffrey’s driven cross into the midfielder’s path.

Dover were soon level when Lokko notched his second goal of the season.

Reason’s corner was not dealt with by Street and after Rigg’s initial shot was blocked by Ross Barrows, Lokko blasted in to complete the turnaround.

However the Norfolk sight levelled with nearly the last kick of the game thanks to Jones’ free-kick.

At the start of extra time, sub Jack Munns nearly poked Dover ahead again, but was unable to connect to Jeffrey’s cross.

Munns then found fellow sub Michael Woods in space, but the midfielder blazed just wide of the Street’s near post.

Despite dominating the first 15 minutes, Whites were indebted for Mersin for a stunning save.

The giant stopper somehow clawed away Marriott’s header after the striker was left unmarked to connect to Jordan Richards’ ball into the area.

Marriott sprinted through as the fourth official put up one minute added time right at the end of extra time, only to tiredly place the ball wide at the crucial moment.

But that miss from National League North’s top scorer did not affect the outcome of the game as all four of the home side’s elected penalty takers scored in the shootout, with only Munns and Jeffrey successful from 12 yards for Dover.

Earlier, Hessenthaler made eight changes to the side that started against Boreham Wood last week, with Lokko, Rigg and Passley the only players to keep their place.

Dover next travel to Chorley in the National League on Saturday 21st December, kick off 3 pm. 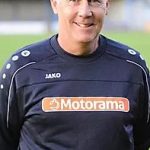 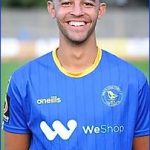