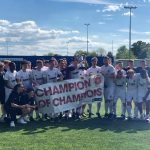 Joshua Spencer’s header 10 minutes from time saw the young Whites’ triumph in the final, held at Oxford City’s ground, as Mike Sandmann’s side completed a league and cup double and remain unbeaten during the season.

Academy boss Sandmann said: “I’m really proud of the boys and they have been rewarded for all the hard work they have put in.

“We did some set piece drills in training and spoke about them again at half-time as it was such a tight game, so it was nice to see us score the winner from a free-kick.

“The lads have come far in their time with us and to be crowned the best academy team in the country, plus go the whole campaign without defeat is something quite special and proof of what a great set-up we have between Dover Athletic and the Abbey School.”

“We have two more tournaments with this group in June and before we welcome a new group from July – and the new lads already have a lot to live up to!

“Most of the existing squad are certainly ready for first-team football and I hope to see a couple involved during pre-season.”

After lifting the trophy, winning captain Jack Smith said: It was such a close game.  At half-time we all felt we could do better and picked up the tempo in the second half.

“To be the Champion of Champions is such a great feeling and it was a real honour to lead out this team.

“The coaching here is excellent and being part of the Dover academy has helped improve me and prepare me for men’s football.”

You can watch Joshua Spencer’s winner below 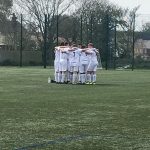 Ryan Kingsford’s 25th minute goal set up a final against Eastleigh academy, to be played on Wednesday 22nd May at Oxford City, kick off 2 pm.

Academy boss Mike Sandmann said of the victory afterwards.  “It’s a fantastic achievement to be in the final out of all the academies in the country and shows where our group of players are and how hard they are willing to work to develop.

“The group have been excellent throughout and I couldn’t be more proud them.  We will be hoping to be crowned the best academy in the country next week and I know the lads will do everything possible to make that happen.

“The final will be the last game for some of our players and it’s been an absolute pleasure to enjoy their progress and development.” 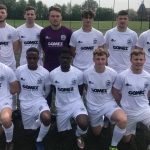 Whites’ youngsters moved in the final four of the National Youth Alliance Champions of Champions after defeating Chester FC Academy 5-4 on penalties on Wednesday evening.

Trailing by two goals at the break, a Marshall Wratten goal in the 67th minute and a Ryan Kingsford penalty 12 minutes from time saw the quarter-final tie, played at the Abbey School in Faversham, decided by spot-kicks.

Academy boss Mike Sandmann said of his team afterwards,  “I couldn’t be more proud of the players last night.  To come back like they did against a side undefeated in their own league this season shows true character and desire.

“I don’t think we played particularly well, but the result is the most important thing and it is fantastic for our academy – in partnership with the Abbey School – to be recognised as one of the top academy sides in the country.

“The players deserve all the credit for getting this far and hopefully we can reach the final.”

Dover’s academy have been drawn away to FCV Stamford in the semi-final, scheduled for Wednesday 15th May. 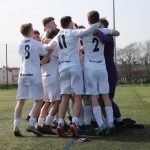 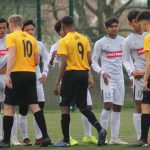 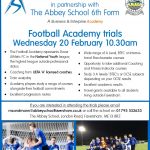 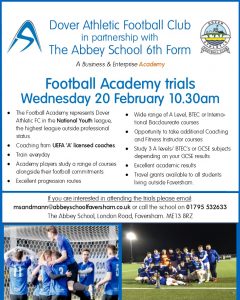 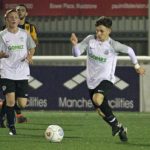 Whites’s academy side were beaten 4-2 by a strong Maidstone United on Tuesday evening at the Gallagher Stadium.

With Andy Hessenthaler overseeing his first training session with the first team squad that same evening since being announced as Dover’s new boss, Mike Sandmann’s academy side represented Athletic in the second round of the Kent Reliance Senior Cup.

The home side were two goals ahead thanks to strikes from Ollie Muldoon and Olu Durojaiye, with the lead further extended by George McLennan and substitute Blair Turgott following the restart.

However Sandmann’s boys, made up of players aged 16-18, hit back twice late on thanks to a Harrison Kempston penalty and Joshua Spencer’s scrambled effort.

And Dover’ academy manager was full of praise for his young team in spite of their defeat.

”That is the best they have played this season by some distance.”  Said Sandmann afterwards.

”I only found out Saturday my lads would be playing in the Kent Cup instead of the first team, but they acquitted themselves ever so well against professional players.

”As you can imagine Maidstone dominated possession, but the boys kept their discipline and shape fantasticaly well, which was always a big challenge as we only have one player over six-feet tall in the side!”

And Mike believes the academy’s Kent Cup experience will only benefit his young charges in the future.

“This is a new group and it takes time to gel, but they showed how well they can play.  They have set the bar very high for themselves and if they can maintain that level of performance, the future is very bright for Dover.” 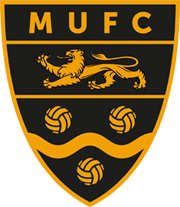 Due to our current management situation, we will be represented by our Academy side in the second round of the Kent Senior Cup at Maidstone United on Tuesday night.

None of our senior squad will feature in the tie at the Gallagher Stadium. 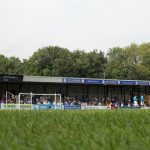 Our Academy will start their FA Youth Cup campaign with a second round qualifying tie against Lewes at Crabble next Tuesday (October 2nd).

There are a total of 76 ties at this stage of the competition, featuring clubs who successfully progressed from the preliminary and first round qualifying stages and 23 clubs who were exempt until this stage.

The game kicks-off at 7pm and admission is £6 with children under 11 free. 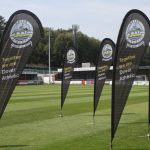 ‘The future of Dover Athletic is bright’, according to Youth Secretary and Club Welfare Officer John Barrett after Whites’ Under 18’s, 16’s and 13’s all won their respective divisions in the Kent Youth Leagues.

‘A couple of seasons ago, myself and Roger Knight set out to raise the standards of our youth teams with a three-year plan’, revealed an elated John.  ‘So to achieve what we have this campaign puts us a year ahead of schedule.’

‘We decided to develop our coaches and we now have three staff just finishing their UEFA B badges and two who are starting the same qualification shortly.’

‘We now hope our success will see more youngsters wanting to represent Dover youth sides and though we realise it’s a big jump to where the first team currently is and where it wants to be in the near future, we believe we have created a decent stepping stone for these lads.’

To see how all Athletic’s youth sides finished, visit www.kentyouthleague.co.uk.