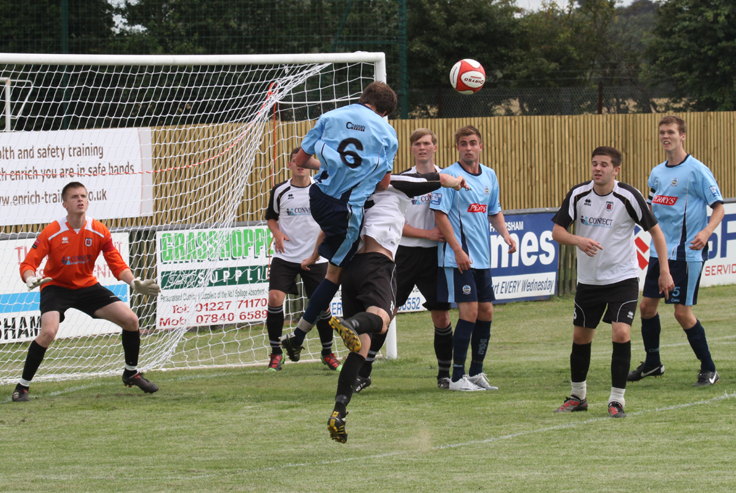 This was the first game back after three weeks out for the boys due to the bad weather. We expected a hard game due to the weather conditions and they were a good passing team.

The game was even for the first 10-15 minutes, Dover having more of the ball. Lloyd Harrington played a great ball down the line to Pouty, who whipped the ball in first time to Connor Coyne. He set the ball back to the edge of the box for Corey Watts, who hit a sweetly struck shot into the bottom corner to make it 1-0 to Dover.

Dover were playing against the wind in the first half which made it very difficult. Despite the conditions we continued to try to create chances, building from the back.

Tom Axford came off injured after about 30 minutes so Joe Blyth was his replacement. There were very few chances in the first half but when Wimbledon did break the Dover defence goalkeeper Charlie Evison was on hand to keep them out with a few great saves.

Wimbledon kept the ball well but Dover worked hard to regain possession of the ball and kept it themselves.

In the second half, Dover were keeping the ball really well winning many corners and creating some good chances. Every ball that was going up to our forward Connor Coyne was held up well, linking the play with our midfield.

Once again Connor Coyne drew the free kick which lead to a wonder strike from Harrington from 30 yards that was too much for the keeper to handle who fumbled into his own goal. This was Harrington’s 3rd goal of the season, two coming from free kicks.

Wimbledon created one or two chances but once again Charlie was solid in goal. Dover continued to create some good chances, one attack starting with Sean Raggett playing the ball into full back Scott Crane who passed the ball into Jack Crittenden. He played a perfectly weighted ball down the right Wing for Corey Watts, who produced some individual skill inside the box before setting up Scott for a shot which was blocked. Excellent build up play that deserved a goal.

Connor Coyne was denied to make it 3-0 with an excellent save one on one with the goalkeeper.

Overall this was a great performance from the Academy boys in a difficult game. The result leaves Dover in a good position in the league.