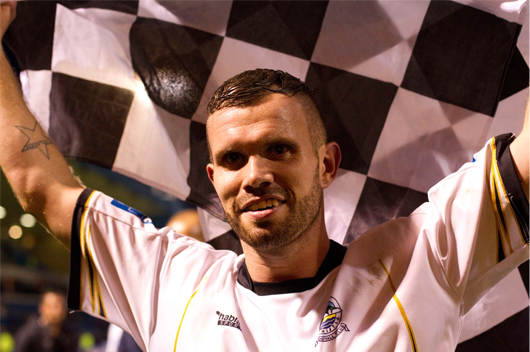 *BS*ADAM BIRCHALL would like to reassure fans that he “totally loves being a Dover player” – and is not “on the phone to his agent every day” seeking a move.

*BF*Kent on Sunday today ran a so-called “exclusive” story which covered a lot of old ground about Adam’s time in the Football League and his ambition to one day return to that level. Much of it was stating the obvious.

Adam has never hidden his desire to be a League striker again and been quoted saying this time and again.

A Kent on Sunday journalist rang Adam while he was at Wembley Stadium on Thursday for some quotes – but some of his comments have either been twisted or taken out of context.

For example, Adam joked that he was “on the phone to his agent every day”. Also he does not think he “single-handedly destroyed Aldershot”.

Adam said: “I was disappointed with the way the article came across this morning. Some of the stuff has been twisted a little bit, which is not nice.

“Dover fans know that I always give 100 per cent to the club and I think they are the best supporters. I have loved every minute playing here – and will continue to do so if no League club signs me.

“One thing I will never do is betray Dover Athletic – but of course I want to play on the League stage again. I’ve always said that.”

The club are intrigued why they were not contacted by the journalist concerned – especially to tackle the issue of Adam “being valued at £250,000”.

Chairman Jim Parmenter said: “It’s strange that this journalist did not bother asking for our view on things. In fact, as regards Adam, we would not stand in his way of joining a Football League club and fees are always negotiable.

“If someone rings us and makes an offer then it is for us to discuss it with Adam and either accept or reject. That’s how football works. But we have not had any contact from League clubs.

“We will not be allowing local reporters to just freely ring up our players in future because of this journalist’s recent activitities.”

Boss Martin Hayes also had his quotes twisted by the same reporter last week, where it suggested he was “struggling to find a striker”.

He said: “It seems to me that the aim of this reporter is to take the most negative angle out of an interview – or cause problems at our club. We will not be tolerating this from now on.”