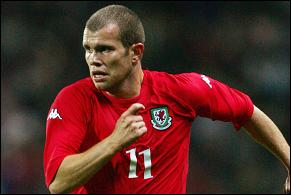 *BS*ADAM BIRCHALL likes to let his football do the talking.

*BF*Not one to boast about his ability as a striker, or set goal targets for the season, the former Wales Under-21 ace prefers to let others rate his performances.

After being asked what Dover fans can expect from the livewire hitman this season after opting to join the Hess Express from Underhill, he said: “I’ve never been one to talk about myself. I prefer to let my team-mates, the manager or the media say things about me.”

As reluctant as he was to talk about his own achievements in the game, which already include more than 150 Football League appearances and 12 caps for Wales at under-21 level, Adam, 24, is quick to explain why he made the move to Crabble.

He said: “I know all about Andy Hessenthaler and Dover Athletic. I’m a Kent lad and this is the club locally which is going places.

*Lpic1*“Andy is a top-rate manager. I played with him at Barnet and used to go and watch him when he was player-manager at Gillingham. I know how he goes about his business.

“He’s the sort of guy that gets the best out of players. You want to do it for him, he’s the kind of bloke that just lifts everybody’s levels.

“Obviously, the chairman is right behind him too – and has turned the club’s fortunes around very quickly. As a Kent boy, I know all about this club and am very excited to be taking on this challenge.

“There were offers from full-time teams, which I had to weigh up first, but in the end this club is on the up and I want to be part of that.”

Adam was impressed with the football style that Hess has instilled at Crabble – which he witnessed first-hand on Saturday when the Whites lost 2-1 to his former club Barnet in a pre-season friendly.

He said: “At Barnet, it was all about percentage football, which doesn’t always suit certain players. Here the team play the ball along the ground – and it’s not only a joy to watch, but it’s enjoyable to be part of.

*Q1*“Dover will have a very good chance of doing well in this division next season. We have a very good squad of players and if Andy can sign Nicky Southall that will be a massive addition to the squad.

“Nicky is another player who I used to watch playing for Gillingham – and I’ve played against him too. He’s a real leader and a quality addition if we can get him here. Things are shaping up very nicely.”

And things were certainly shaping up for Adam too. He scored on his debut, adding to Jon Wallis’ opener, before Shaun Welford also netted as Whites won 3-1 at Homelands against Maidstone on Tuesday night.