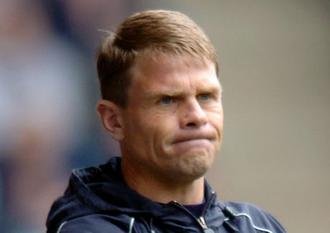 *BS*ANDY HESSENTHALER has had an illustrious career as both a player and manager – and is best known for his 10-year spell at Gillingham as a player, coach and manager.

*BF*Despite having trials for Charlton and other teams as a youth, he did not play as a full-time professional until he was aged 26.

Working as a builder, he played for Dartford, Corinthian and Redbridge Forest as a part-time semi-professional, (he was named by Sven-Göran Eriksson in an all time England semi-pro XI) until, on the recommendation of Peter Taylor, he was signed by Watford for £65,000 at the beginning of the 1991-92 season.

He played 217 games in five seasons for the Hornets (195 appearances and 11 goals in the league), characterised by his very high workrate and fitness.

At the beginning of the 1996-97 season, he dropped a division to sign for Gillingham, for what was a then record £235,000 for the newly promoted Kent side.

He was player of the season in his first year, and went on to repeat the feat three times in his Gills career. During his second season at Gillingham, he built a house at Northfleet, and this took its toll on his performances, but he returned to his energetic best for the following season, when Gills, and Hessenthaler, had their first game at Wembley in the play-off final against Manchester City, a game that ended in penalty disappointment for Gillingham.

That was the last match as Gillingham manager for Tony Pulis, who had signed Hessenthaler, and his replacement, Peter Taylor, had Hess and Steve Butler appointed as his coaches.

The following season (1999-2000) was a great success for Gillingham, including their most successful ever FA Cup run and highest ever (to that date) league finish.

The cup run eventually came to an end in a quarter-final tie against Chelsea in which Gillingham were generally outclassed, but Hessenthaler’s energy-packed performance prompted Chelsea chairman Ken Bates to joke that his team might be interested in the young number 8 (Hessenthaler was 35 years old at the time).

For the second year in a row, a Hessenthaler goal in a semi-final was key in Gillingham achieving a Wembley play-off final appearance, and on this occasion Gillingham beat Wigan 3-2 after extra-time.

Peter Taylor left to manage Leicester during the following season, and so Gillingham started their first ever season in the Football League First Division with Hessenthaler as player-manager, and Steve Butler as coach, although he soon left to join Taylor at Leicester.

*Ppic1*In September 2000, Hessenthaler became the first player-manager to win the player-of-the-month award, and he combined the roles of a key midfielder and manager with some success, Gillingham finishing 13th, 12th and 11th in the second flight in their first three seasons at that level, although most of their opponents had budgets for transfers and salaries far greater than those at Hessenthaler’s disposal.

A bad leg break in an FA Cup tie at Bournemouth in January 2001 looked at one stage to have put an end to his playing career, but he resumed his place in the side at the beginning of the following season.

He brought about an unusual situation in a match at Cardiff City where he was, as manager, sent from the touchline, but shortly after brought himself on to play as a substitute.

During his fourth season in charge at the Priestfield Stadium, things began to go awry.

Coach Richard Hill had left and financial pressures on the club meant that players leaving were not replaced with players of an equal standard, and Gillingham only avoided relegation at the end of the 2003-04 season on goal difference.

Club owner Paul Scally had stated that he would never sack Hessenthaler, and appointed former England assistant manager John Gorman, to help him as the side struggled again at the start of the 2004-05 season, but Hessenthaler resigned as manager in late November 2004.

He found himself in the unusual position of remaining at the club as a player, but was picked only very occasionally by the new manager, Stan Ternent, and in January 2005 he went on loan to Hull, playing six games in their promotion campaign. Gillingham, meanwhile, were relegated, and Ternent left, to be replaced by Neale Cooper.

Although he turned 40 soon after the start of the 2005-06 season, Hessenthaler continued to feature regularly in the Gillingham team, making 17 appearances, the final one in a 3-0 home win against Port Vale by which time Ronnie Jepson had been appointed manager.

After not being selected for more than a month, he decided that the time had come to move on from Gillingham, and was soon snapped up by Barnet to add his energy and experience to their ultimately successful battle against relegation to the Nationwide Conference.

While at Barnet he played his 600th league match, not an unusual milestone of itself, but remarkable for a player who started in the professional leagues at an age when most players are in the latter half of their careers. He was still playing regularly at the age of 41.

*Lpic1*In his 10 seasons at Gillingham, Hessenthaler made 326 appearances, scoring 28 goals, and became a great favourite, being voted the team’s greatest ever player in a local radio poll.

He broke records as the oldest player to appear for the Gills, as the winner of most player-of-the-season awards, and as the player with most yellow cards accumulated, statistics that attest to his energy and his effective but uncompromising style.

His service to the club earned him a testimonial match against West Ham United on July 29th, which Gillingham lost 2-1 in front of a crowd unofficially estimated at 6,500-7,000.

Hessenthaler was given standing ovations by both the Gillingham and West Ham fans before and after the match.

On July 16 2006, having played in a pre-season match against Arsenal the previous day for Barnet, he turned out for Watford in the London Masters tournament and was named as “Player of the Tournament”.

Aged 41 Hessenthaler was named in the League Two team of the week but at the end of the 2006–07 season Barnet announced that his contract would not be renewed.

And in a move which is sure to cause a big stir in Kent football, Andy was named Dover Athletic’s new manager in May 2007.

It was a move which is sure to raise eyebrows – but with Dover Athletic a club punching below their weight in the Ryman League Division One, Hess and club chairman Jim Parmenter believe he is the man to revive a sleeping giant of non-league football.