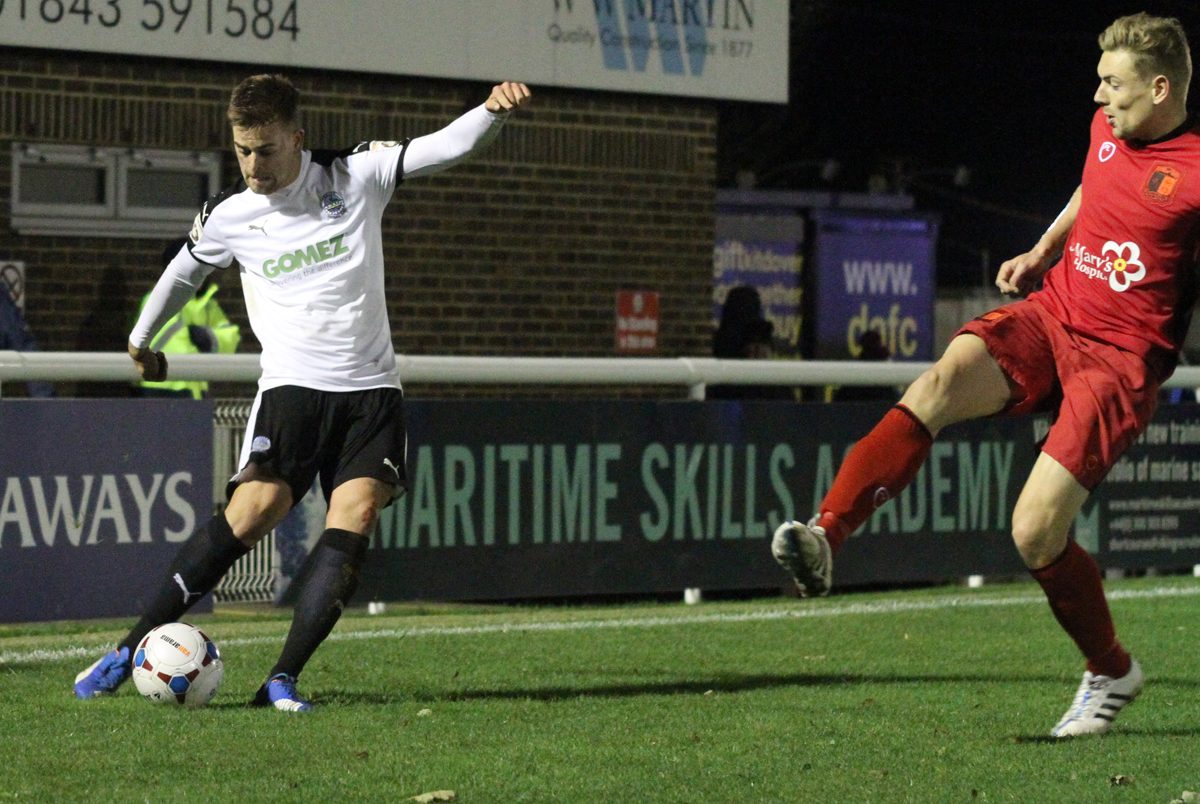 *BS*In the latest instalment of the ‘Ask A White’ Twitter Q&A sessions, Sam Magri was invited to take part in answering fans’ questions on Wednesday evening.*BF*

In this edition of the ‘Ask A White’ feature, Sam discusses his favourite match so far this season, his advice for budding footballers and tells us his questionable choice of favourite Christmas present received.. plus much more!

On Friday evening, it will be the turn of goalkeeper Andy Rafferty to take over our Twitter account and answer your questions. To get involved with that Q&A, simply tweet our club account @DoverAthletic, using the hashtag #AskRaff – or e-mail your questions through to jack.osullivan@doverathletic.com

Below is the transcript from the Q&A session with Sam Magri.

*BS*@Liamsmithdover: If you weren’t a footballer, what would you do as a job?*BF*
Magri: I think I’d like to do something with cars, I’ve always been into them but I think sales rather than a mechanic.

*BS*@matthew_gerrard: When is your next Malta get-together, and are you hopeful of winning a full cap soon?*BF*
Magri: I’m pretty sure there’s two games in March. A full cap would be great! That is the aim for me – I’ve got to try and keep doing well!

*BS*@Liamsmithdover: I always see your family at the games, have they always supported you in your football?*BF*
Magri: Yeah, they’ve always been there for me, bless them! They haven’t missed a game yet this season, and there’s been some long journeys. I appreciate it massively.

*BS*@mjjakeman85: How did you enjoy your loan spell at Nuneaton Town?*BF*
Magri: It was great, I really enjoyed it. The fans were good to me and it was a good group of lads there. It was great to get some games for them.

*BS*@DoverAFC: What was your favourite present that you got for Christmas?*BF*
Magri: I got one of those Apple watches. They’re really good and pretty helpful. I did get Justin Bieber tickets as well..

*BS*@pwjverrill: Nothing wrong with being a Belieber, Sam – favourite song please?*BF*
Magri: Is it too late now to say sorry! (I’m currently singing in the mirror..) – my favourite of his is ‘Sorry’.

*BS*@jackosullivan01: What aspect of your game do you think you need to work on the most?*BF*
Magri: In my opinion, at the moment I still think I need to be fitter than I am, so if I could improve my fitness that would be a big help.

*BS*@Liamsmithdover: Who are you closest with at the club?*BF*
Magri: I’d have to say Ricky Miller and Jack Parkinson.. both top lads!

*BS*@Liamsmithdover: What advice would you give to children wanting to follow in your footsteps?*BF*
Magri: The first, and main thing, is to just enjoy playing football. Work hard and do your best at all times, then hopefully everyone will get to where they want to be.

*BS*@JaySimister: Do you still harbour the thought of one day playing for Pompey?*BF*
Magri: Of course I do! It’s my hometown club who I’ve always supported, so if I did get the chance again then that would be great! But no-one can tell the future, so who knows..

*BS*@NeilMoors1: Who was your childhood footballing hero? (Mine was Sir Lennie Lee)?*BF*
Magri: When I was growing up, I always enjoyed watching John Terry. His passion was unreal – top defender!

*BS*@WilliamBussey3: Where you think Dover will finish this season?*BF*
Magri: I think we’ve got a great chance of finishing in the playoffs. If we replicate the first half of this season then we’ll be fine. We just need everybody, all the supporters, behind us!

*BS*@young_gun180: Where do you prefer playing – centre back, or right back?*BF*
Magri: I’m really enjoying playing at right back, so I’d have to say there. I’m involved in the game a lot there.

*BS*@DoverAFC: Did you buy a Lotto ticket for the £50 million rollover? What would you buy if you won the jackpot?*BF*
Magri: No I didn’t, I’m gutted! If I was to win then I’d sort my family out, then buy a massive house and a couple of cars. It’d be nice to help people out, too!

*BS*@jackosullivan01: Who is the most famous person in your phonebook?*BF*
Magri: Raheem Sterling, if he hasn’t changed his phone number lately!

*BS*@matthew_gerrard: Who would you rather meet, Bieber or John Terry?*BF*
Magri: I’ve met John Terry before, so I’d take my man Bieber..

*BS*@Uppo1963: Which team mate wears the dodgiest clothes?*BF*
Magri: Everyone’s not too bad to be fair, but some of Jamie Grimes’ trainers are absolutely horrific!

*BS*@DoverAFCfan: Sam, I hear you live down Portsmouth way, if so how do you cope with the travelling?*BF*
Magri: Yeah, I live in Portsmouth. I don’t really think about the travelling anymore – I suppose I’m used to it by now.

*BS*@Archedmo: What’s the best part of playing for Dover?*BF*
Magri: Being given the chance to play every week! The fans are always good, especially at away games, always good numbers!

*BS*@Uppo1963: Did you enjoy your trial at Anfield?*BF*
Magri: It was amazing. Seeing the likes of Steven Gerrard and Kenny Dalglish at the game, and the training ground was a different world. It went really well but sometimes there’s complications.

*BS*@Archedmo: What is your pre-match ritual?*BF*
Magri: I like to go in before kick-off a bit earlier than the others, and have five minutes to myself before the game starts.

*BS*@CamillaAlice92: What has been your favourite match to play in this season so far?*BF*
Magri: Away at Tranmere. Big club, lots of fans – no-one expected us to do well, and we won 1-0. It was a great day for the team and the fans!

*BS*@peter_ray79: How did you get to play for Malta U21’s?*BF*
Magri: They’ve always kept an eye on me from when I was a bit younger, and last year they got in touch and started the process of me playing for them.

*BS*@matthew_gerrard: How different in terms of quality and physicality is U21 football at Palace, compared to football in The National League?*BF*
Magri: Physically, there’s no comparison – The National League is a lot tougher! Obviously there’s good players at pro clubs in the 21’s, but also in our league. Mens football is a lot tougher in general – it took some getting used to!

*BS*@NaomiFisher1203: What were your best parts of 2015?*BF*
Magri: Football wise, it was signing for Dover and getting the chance to prove myself every week. In my personal life, going to Florida with all the family – finally getting my Mum and Dad on a plane for nine hours!

*BS*@Liamsmithdover: How did you propose to your fiancee.. and is your reception at Crabble?*BF*
Magri: We went to Hawaii and we went up this mountain overlooking the whole of Hawaii – then, when she turned around and wasn’t looking, I was on one knee! I’ll have it at Crabble if the Chairman gives it to us for free..

*BS*@jackosullivan01: What do you like to do outside of football?*BF*
Magri: Me and my Dad have a little fishing boat – we love to go fishing. Other than that, you’ll find me at the tattoo shop.

*BS*@DoverAFC: What is your New Year’s resolution – and have you broken it already?*BF*
Magri: I didn’t really set one, but I promised my Mum I’d take the dog out more for her!

*BS*@B_Bowman94: Football Manager or FIFA?*BF*
Magri: FIFA all day long! Although I expect they’re both as stressful as each other..

*BS*Final message from Sam*BF*: To all our fans, thanks for all your support to myself personally and the team this year! Continue to get behind us and help us get into the playoffs, and let’s all go to Wembley!