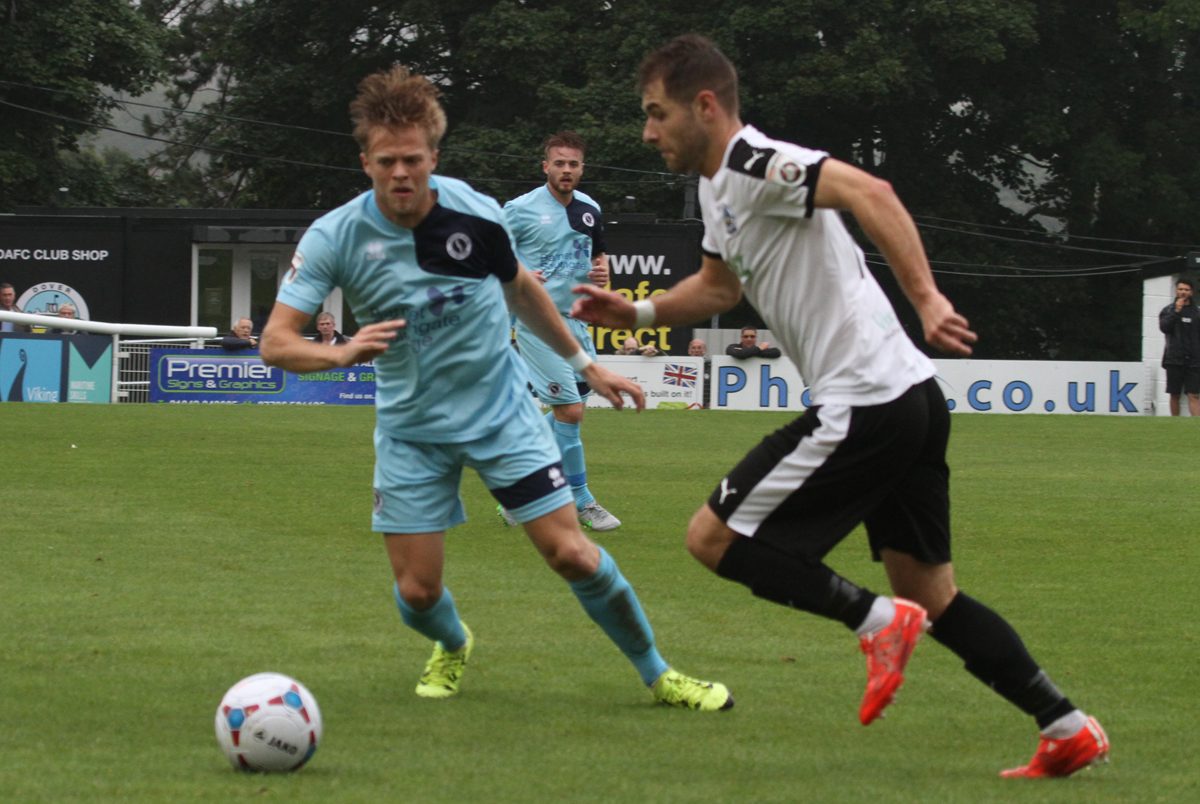 *BS*Nicky Deverdics took over the Official Dover Athletic FC Twitter account for the 1st Q&A session with DAFC fans, eager to learn more about their hero and the man who wears the number 17 shirt.*BF*

The event, called ‘Ask A White’, was a great success, with Nicky going over his hour-long slot by 40 minutes!

Nicky revealed to DAFC fans how he unwinds after a match, away day trip antics, his favourite match day song and plenty more.

Below are questions posed by Dover fans and Nicky’s answers:

*BS*@mattclements: What has been your favourite match playing for DAFC so far?*BF*
ND: The FA Cup last season at Cheltenham. Winning it in the last 10 at the end where our massive support was.

*BS*@peter_ray79: Hello Nicky, you’ve played for a few clubs, how is the team spirit/team bonding at Dover compared to other clubs?*BF*
ND: It’s good, there’s always banter flying about but that’s all it is, and all the lads get on. We’ve had no training ground bust ups so far!

*BS*@alexsouthey1: What areas of your game have improved the most since joining the club?*BF*
ND: Well apparently I score goals with my head now – I wasn’t aware of this before I arrived!

*BS*@LeeCPFC: Nicky, what’s the biggest game you have been involved in during your playing career so far?*BF*
ND: Well it was the first time I’d reached the 3rd Round of the FA Cup so that was big, But I’d say winning Scottish Div 1 with Gretna, with the last kick of the last game of the season. Absolute madness!

*BS*@jordandafcbaker: What are the team’s ambitions for this year?*BF*
ND: Has to be playoffs minimum & matching what we did in the cups last year. We know we have the players. It’s about properly believing it as a group. We aren’t far away.

*BS*@DoverAFC: What’s your favourite thing to do after a match?*BF*
ND: That depends a lot on the result. I’d say go out with a couple of mates but the gaffer will see this and think I go out every week haha. If we’ve lost though, I’m best avoided until Sunday haha.

*BS*@All_Time_Lozil: What helped you decide that Dover was the right place for you?*BF*
ND: Club made it clear before last season ended that they wanted me here & they ambition for this season. I wouldn’t have come back if there was no plan to have a go at it this season.

*BS*@CpSnuggs: You played in Iceland and the Faroes. How do the standards there compare with the National League?*BF*
ND: We’d batter both teams I played in. We’d probably let them back in it just before half-time though!! Seriously though, it wasn’t great – we’d win comfortably.

*BS*@DoverAFC: Do you watch/read Game of Thrones? Who’s your favourite character?*BF*
ND: I’ve watched a lot of series but GOT isn’t one of them. I’ve seen 5 mins of one episode and there was a little dwarf dude, so I’ll say him!

*BS*@alexsouthey1: What has been your worst injury?*BF*
ND: Broke my ankle at 16. I was trying to improve my jumping by heading the washing line in the garden. The ball rolled down the garden, I landed on it – game over! & I’ve had a grass burn for 2 weeks now.

*BS*@matthew_gerrard: Newcastle is a long way from Dover how did the move come about; did you know much about the club?*BF*
ND: My agent spoke to the club and the gaffer said come down. We absolutely love a trialist and the odds were one would come good, haha! I’d played a pre-season game at Dover in my Barnet days, but that’s about it.

*BS*@DoverAFC: If you could meet anyone famous and spend the day with them, who would it be and what would you do?*BF*
ND: I’d be one of Vincent Chase’s entourage and spend the whole day with Ari Gold.

*BS*@AndyMikey8: Who is the fastest player at the club?*BF*
ND: There will be arguments over this cos we have a few but from what I’ve seen I’m going for Ricky Modeste.

*BS*@CamillaAlice92: Which squad member would be the last one standing on a night out?*BF*
ND: Tyrone. I don’t know if he can handle his drink, but he’s the tightest man alive so probably won’t buy one!

*BS*@young_gun180: Funniest away day last Season?*BF*
ND: Can’t remember which game it was but one of the last. Wynts (Tom Wynter) took his tracksuit top off on the train and somebody *cough* Payney (Stefan Payne) chopped one of the sleeves off. The train erupted when he went to put it back on!

*BS*@NeilCare: SO GLAD YOU DID, but it took a while for you to sign a new contract in the summer. Any reason for this?*BF*
ND: I made no secret of wanting to play league football again, but I was also happy playing for Dover, so when things were taking time to materialise and the club had been really patient with me. I decided to re-sign so everything was sorted and I could focus on preparing for the season.

*BS*@young_gun180: Who would win in an argument, you or Rich Orlu?*BF*
ND: Orlu hands down, he could argue with himself. Even if I was 110% right and the whole world knew it!

*BS*@mattclements: Which current teammate do you enjoy playing alongside the most, and why?*BF*
ND: That’s tough, because it’s any of 3 – Murph (Tom Murphy), Payney and Modeste because they are the boys I’ve been supplying for the last year and lucky I have a good understanding with them all. If I didn’t, then I’d look pretty stupid at times with some of the passes I play!

*BS*@dovermowl: What’s your favourite River End song?*BF*
ND: You hear the crowd in games but don’t really register what they’re singing when you’re concentrating. Although I was laughing mid-game when they were giving it to Chester fans about being Welsh! Oh, and Murph’s song is decent!!

*BS*@anthonyfuller9: My favourite goal you scored was against Woking free kick. What’s your favourite for DAFC?*BF*
ND: I’d have to agree with that as well – especially with the content of the game as well. I’m been hitting them well in training so I’m fuming my last 2 have been toilet and have hit the wall!

*BS*@pktsmith: Who’s the longest in the shower?*BF*
Wynter. I’ve never actually seen him wash himself, he just likes to stand there & put everyone on edge! Haha

*BS*@JohnBurton987: Who would you choose for your midfield partners if money was no object?*BF*
I’d have to go for Iniesta – he could make my gran look a good player, and Modric for similar reasons. Their brains are a joke. We’d keep the ball for fun cos we’d be scrambling if we had to defend! Haha.