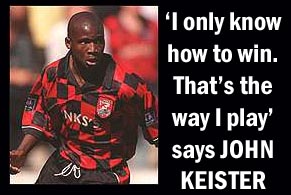 JOHN KEISTER says it was an easy decision to leave Margate behind after five years and join Dover Athletic.

And Keister, 35, insists it was the sense that Dover are a club on the up which made him opt to leave Hartsdown Park.

He said: “It wasn’t a difficult decision. I’ve been in the game a long time and I could sense that Dover Athletic are a good club, one that is going places. I like the ground, the big crowds they get, the manager, the chairman and the ambition.

“I am ambitious too – I like that hunger to be successful and that’s what struck me most about Dover Athletic. Of course, I know chairman Jim Parmenter from Margate, so seeing a familiar face makes things easier too.

“There is definitely potential at this club and I want to do my best to help them achieve their first ambition, which is to win promotion from Ryman League Division One.

“I’ve played against Dover a couple of times and when I faced them in a friendly last season I thought they had a pretty decent team.”

Keister played 124 games in the Football League for Walsall, Shrewsbury and Chester before moving onto Conference club Stevenage and then Margate. He also won 17 caps for his country, which took in World Cup qualifying games against Nigeria and Morocco.

He hopes to use that experience to help the younger players in the Dover squad.

The new Whites star said: “I hear a lot of people say that you need lots of pace and younger legs at this level. I don’t agree. I believe this level of football needs experienced heads to help guide the younger lads through.

“It’s not an easy level to play and the refereeing isn’t as good as it is higher up the football pyramid. I am hoping to pass on my experience to the other lads and there’s a lot of experience now in the Dover squad, which has been there and done it. I think that can count for a lot this coming season.”

Keister, nicknamed the Assassin by his old Walsall team-mate and former Kidderminster Harriers boss Stuart Watkiss, is renowned as a physical competitor and not afraid to put his foot or head into a challenge.

It has led to some fans criticising the amount of cards he picks up – but Keister said he is not going to start taming his game now and believes some of the criticisms are a bit far-fetched.

He said: “It’s true I pick up a few bookings. That’s just the way I play. I go into a tackle to win the ball. I am never going to hold back – otherwise what is the point?

“Unfortunately, at this level, referees are more inclined to get the cards out. It is true that I got booked far fewer times when I was playing in the Football League than I do now.

“But I know this level and it’s not going to be a problem. I am going to play to win – and do my very best to help Dover Athletic be successful. It’s the only way I know.”

With Danny Chapman playing alongside him, Whites fans can expect to see some fireworks in the middle of the park.

But Keister added: “I am here to enjoy playing football – and to play with a smile on my face. That’s the best way to play.”