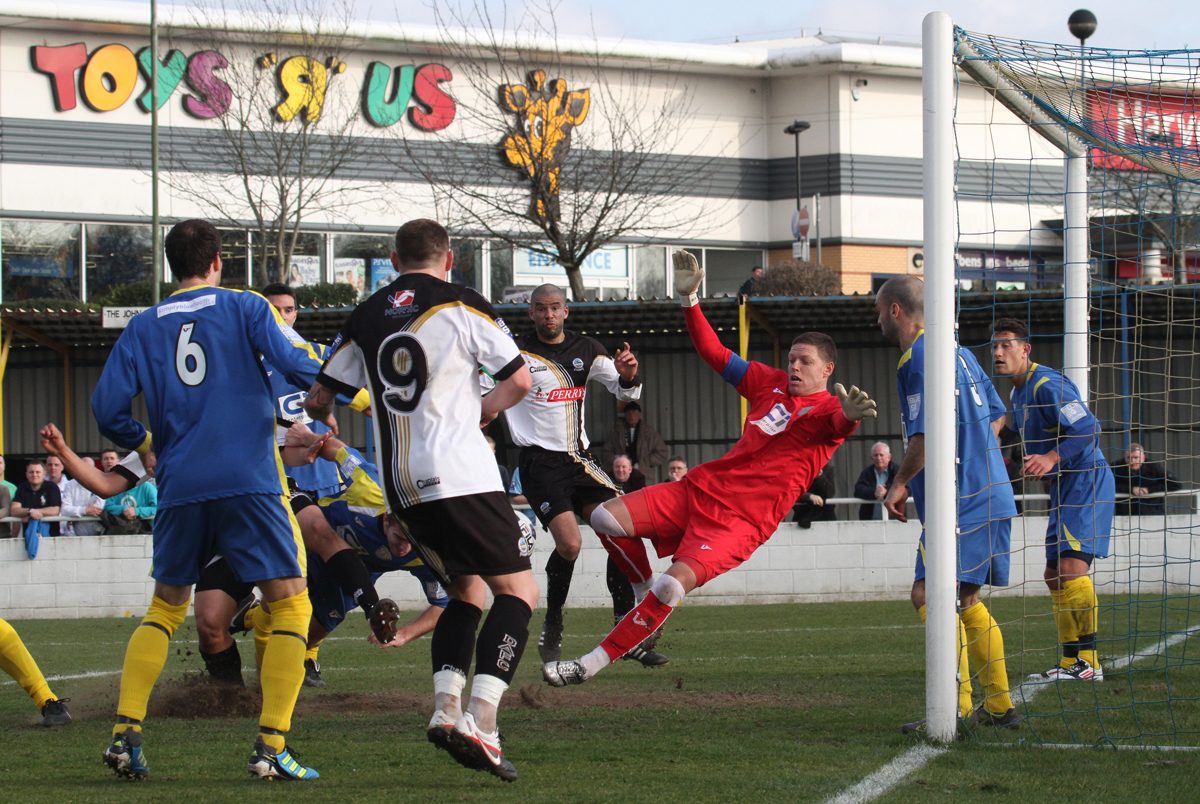 *BS*Dover Athletic are now undefeated in eight games in all competitions – just a goalless draw at home to Havant preventing a 100% record – meaning that confidence at Crabble is higher than it has been all season.*BF*

The side have gone four league matches without conceding a goal, which was last achieved almost six years ago. A clean sheet on Saturday would equal a feat last managed nearly a decade ago, when Whites were competing in the Ryman leagues.

Last Tuesday’s excellent 4-0 victory away at Eastbourne Borough was much needed – as well as three vital points, the side hit four goals for the first time in the league this season and shook off the unwanted tag of being the lowest-scoring side in the division. This victory was followed up by a 3-0 win in the FA Cup at home to Oxford City, courtesy of goals from Nathan Elder, Barry Cogan and Sean Raggett.

Raggett, who has consistently impressed since being introduced to the side earlier on in the season, has now signed a contract extension which shall keep him at Crabble until the end of next season. A product of the club’s Academy, the youngster has become a key member of Chris Kinnear’s side and has started to add goals to his game.

This weekend sees the side make the trip to Hampshire to face a Basingstoke Town side who sit one place below Dover in the Skrill South table, in eighth place. Town lost key striker Delano Sam-Yorke to Cambridge United in the summer, but will be happy with their start to this campaign – last season’s eventual finish of 14th place sounds comfortable enough, but the tightness of the division last time around means that they ended only four points above the relegation zone.

This season has seen Town pick up six wins from their opening twelve games, including an impressive 2-0 victory over pre-season favourites. It has been at The Camrose that the side have been at their best, winning four times and losing only once – against Hayes & Yeading.

Top scorer for Basingstoke this season is Manny Williams, a well-travelled striker who scored 12 goals in 23 appearances last season. So far in this campaign, Williams has found the net seven times.

The two clashes between the side last season ended in contrasting outcomes – at The Camrose, a fourth minute goal from Ben May was enough to seal all three points, but since then the look of the side has certainly changed – of the fourteen players who took part in that match, only four are still with the club.

The return fixture, which Whites entered on the back of twelve matches unbeaten, saw the visitors run riot and win 5-0, handing Chris Kinnear the first defeat of his second spell in charge of Dover. The afore-mentioned Williams found the net twice that day, and the memories of this game are likely to still be at the back of Kinnear’s mind so Saturday’s match is a perfect chance to heal these wounds.

Midfielder Ricky Modeste went off injured in last weekend’s match against Oxford City, and it is not yet known if he has recovered in time to play a part on Saturday. His loss, if indeed he is not match-fit, would be a big one – this season, Modeste has been one of the side’s key players and is at the top of his game. Liam Bellamy, recently back from injury himself, replaced Modeste in that match and is the most likely candidate to be given a starting place if need be.

Saturday’s match forms part of a league double-header before the FA Cup First Round match against Corby Town, with Eastleigh the visitors to Crabble on Tuesday night.