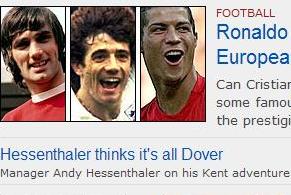 *BS*DOVER ATHLETIC fans knew their club would be put in the spotlight the moment Andy Hessenthaler became manager in May 2007.*BF*

Since then the club has gone from strength to strength on and off the field, including winning the Ryman South title and opening a new Centre Spot venue.

Hess has wasted no time in becoming a Crabble legend and his team’s fantastic start to this season is causing a stir both locally and in the wider football community.

Dovorians now have the pleasure of reading about their club and manager on the the BBC Football website:

A further sign of the respect being given to Dover Athletic this season is the decision of the Ryman League to award Sutton United with the November Performance of the Month Award for their 1-0 victory against Whites two weeks ago.