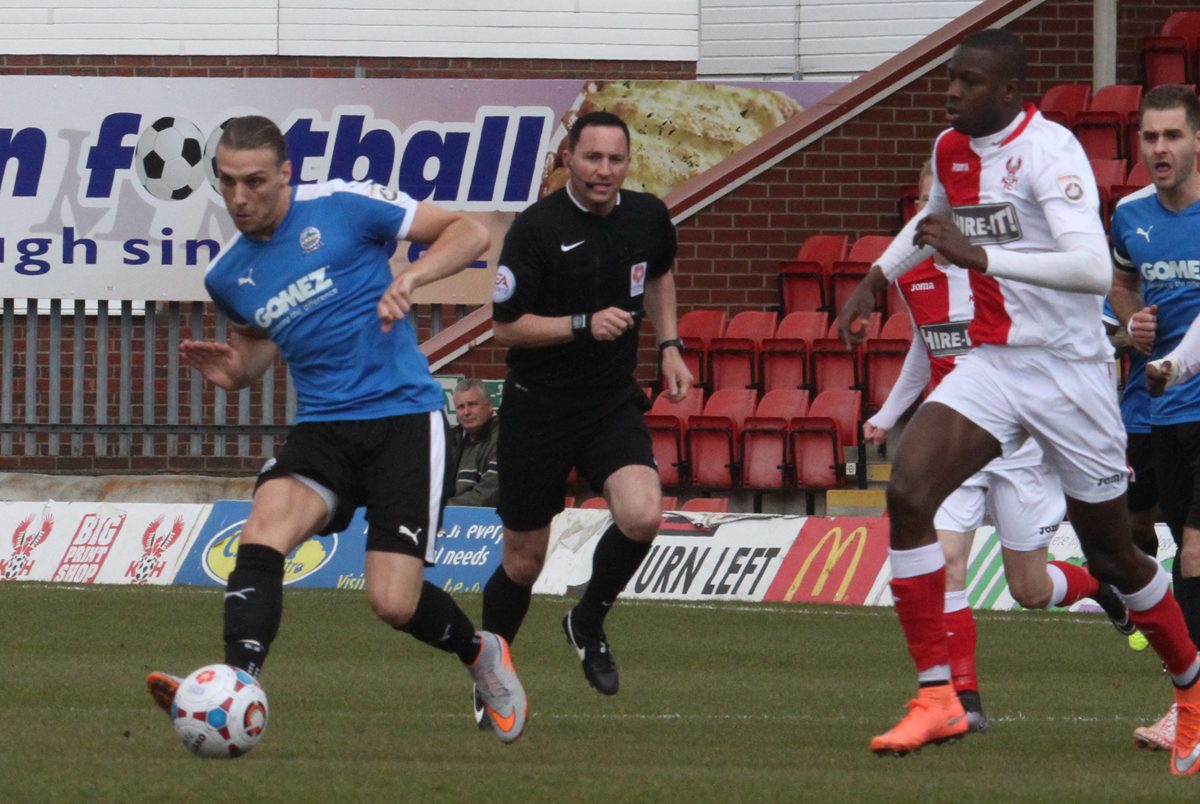 *BS*Dover Athletic midfielder Liam Bellamy tells Jack O’Sullivan that the side are keen to going into the playoffs on a high by beating Forest Green Rovers at Crabble on Saturday – emphasising that the club’s supporters still have a vital role to play this season.*BF*

The 24-year-old, who has now been with the club for almost three years, expressed his delight in the side booking their playoff spot at Kidderminster Harriers last Saturday – but said it’s been on the cards all season long. He said: “At the start of the season, almost everybody outside of the club said we wouldn’t be contenders – or anywhere near the top.

“In the dressing room, however, we always believed our squad was strong enough. If we hadn’t finished in the playoff spots this season, then we would’ve all been very disappointed.

“We deserve to be in there. After 46 games, you finish where you deserve to – we’ve been consistently strong pretty much all season long and now we go into the playoffs with absolutely no fear.”

This weekend, Whites welcome Forest Green Rovers to Crabble in the final match of the regular season – a match which kicks off at 5.30pm. Despite both sides having secured a playoff spot already – Rovers are guaranteed second place – Bellamy says there is a real determination to finish on a high, and not take their foot off the gas, saying: “We will go out there and do what we do in every match – try to win. We want to finish strong and keep up the momentum.

“I’m not fussed who we play in the playoffs. Whether we finish third, fourth or fifth, and no matter who we end up against, we can beat anybody in this league – we’ve shown that throughout the season.

“Cheltenham have won the league but over the two games against them, I don’t think they were that much better than us. Look at the match at Crabble – we battered them for 85 minutes but lost it right at the end. That’s why they’re the champions though – they have ground out results throughout the season.

“Against Grimsby at Crabble we were superb. I thought that second half of football was as good as we’ve played all season, and I still don’t know how we only drew that game.

“I think we will go into it as the side that nobody fancies playing. The opposite goes for us though – we have confidence in our game and we’ll take anybody on.”

Bellamy was also keen to pay tribute to the club’s supporters, who have turned up to Crabble in their droves in recent weeks to help the side get over the line. He said: “The fans at Dover make an absolutely massive difference. They really are our 12th man. Against Grimsby, you could hear them throughout the whole game and the vibe around the place was brilliant. We want to keep Crabble as a fortress and we know the fans will be right behind us over the next few weeks.

“It’s not just at home though – look at Kidderminster away last weekend. They were so noisy and so supportive, it was great. When we went over to them after the game, you could feel the passion – as a team, we know how much this means to the fans and it means a lot to us as players too.

“The gaffer has got things spot on this season, especially with the type of players he has brought in. It’s always been just as much about the character of the players – we’re all close, and there’s no bad eggs in the side – which you do get at other clubs.

“There’s nobody here that is at the end of their career and just looking for a final payday. If we can keep the core of this squad together, then who knows what will happen in the future.

“Everybody here is young, hungry and ambitious and we all have one aim now – to win promotion.

Bellamy’s season has been disrupted at times through injury, but the former Charlton Athletic man knows how he wants to end the season: “I just want to play, and help the team by doing my best. I know what my role is within the team and I know the way the gaffer likes me to play. I just want to win football matches. Wembley would be great too..”