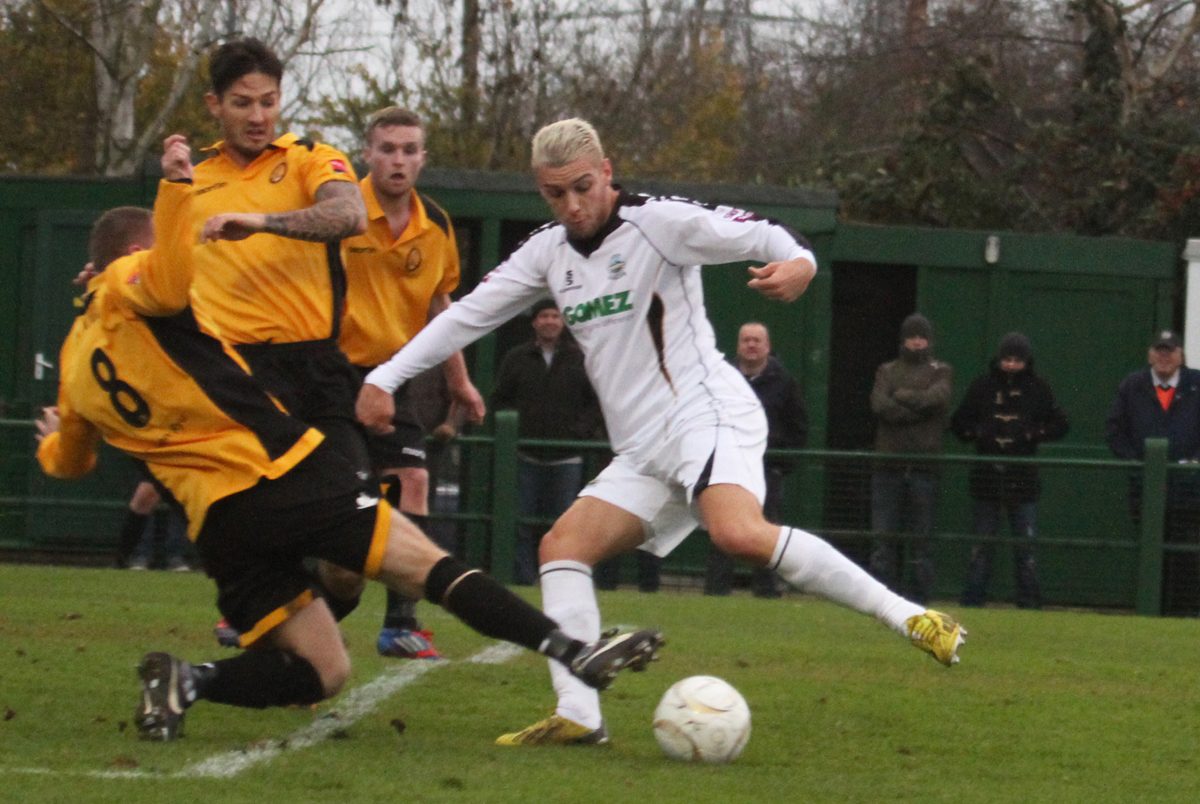 *BS*Kicking off a week of FA Cup oriented interviews, Dover Athletic midfielder Liam Bellamy speaks to Jack O’Sullivan about Saturday’s FA Cup match against MK Dons – assuring supporters that the side firmly believe they can get a result.*BF*

The tall 22-year-old midfielder was Chris Kinnear’s fourth signing during the summer of 2013 and, despite an injury setback in pre-season, is now well on the way to establishing himself as an instrumental part of the Whites side.

Before Saturday’s tie, Dover face an FA Trophy replay against East Thurrock – a match Bellamy feels they should have won at the first attempt: “We were expected to win at their place, but the gaffer had warned us beforehand that they are decent at home – they’ve had some good results in cup competitions here before.

“It was a tough place to play. There were some strong challenges going in, a few naughty ones too – I’ve got stud marks down the back of my achilles where one of their players scraped his studs whilst I was running. Realistically, the Trophy is a competition we have a genuine chance of doing very well in, perhaps even winning. We’re disappointed we didn’t win on Saturday, but what’s happened has happened – now, we just have to win tomorrow.

“Whilst they do have some good players, facing them at our home ground is a game we should be looking to win quite comfortably.”

Bellamy’s hopes for a good Trophy run were boosted this lunchtime, when the draw for the next round was made. If victory is sealed tomorrow, Whites have again avoided Conference opposition and will host either Leamington or Northwich Victoria in the second round – knowing that a win in that round would leave the club just three victories from a Wembley final.

Despite the injury picked up against AFC Hornchurch back in July, Bellamy remained focused on getting his place in the side back and has now started the last three matches: “I’ve been determined to show the boss what I can do. I was brought into the club to do a job, and I’m glad I’ve been able to show that recently.

“I think I’m a versatile player and that I am able to affect the game. I’m able to play out on the right, but am much more comfortable through the middle. Against Chelmsford, when Lee (Sawyer) was sent off, I moved into the centre and felt I performed much better. And no matter what anyone says, that was definitely my goal!

“It’s the most frustrating thing as a footballer to be sitting on the sidelines and not able to influence a game. All of the squad are desperate to play games, we all think we’re good enough to be starting – so when the opportunity comes, you have to take it.”

Despite there being over 70 league places between Dover and MK Dons, the ex-Charlton midfielder is adamant that the side are not just going to Milton Keynes to make up the numbers and is eagerly anticipating the match: “I’m absolutely buzzing, I can’t wait for Saturday. I honestly believe that, with the squad we have and the way we’ve played over the last two months, we can cause an upset.

“Of course, it’ll be very tough and we’ll go in as big underdogs, but that will suit us. There’s no point us going into the match thinking we will lose. We’re going there to win.”

One obvious difference between the two sides could be fitness levels, with Saturday’s opponents being full-time, but this does not concern Bellamy: “We’ve got some very, very fit players in our side. The backroom staff are very strict about us taking care of ourselves off the pitch, which translates onto the pitch – they really look after us.

“I played in the first round of the FA Cup last season for Ebbsfleet, against Carlisle. For the first hour we matched their fitness levels, but there were some tired legs after that (three of Carlisle’s eventual four goals were scored in the final 30 minutes). That won’t happen to us on Saturday, though – we’re a very fit side.

“With players like Nathan (Elder), Terrell (Forbes) and Barry (Cogan) in our side, plus those of us who played for professional clubs at youth level, we have a good amount of Football League experience in our side. The fans will play a big part of the day, and it’ll be great to see so many making the trip – I’ve got a coachload of friends coming up.”

Like many of Saturday’s side, this will be Bellamy’s first appearance at this stage of the FA Cup, and says it will naturally be one of the most important games he has taken part in: “The whole experience will be special, and I can’t think of a bigger game that I have – hopefully – been involved in.”

Whites will have Barry Cogan available for selection, with his suspension now ended, but Ricky Modeste remains a doubt: “I’m not sure if Ricky will feature – even if he is fit, he wouldn’t have played for a good few weeks and it’s a big game to come back into. Hopefully he can play some part, though.”

As a West Ham fan, Bellamy says his dream third round tie would be a trip to Upton Park, but assures me that he would still want to win. The other club he would dream of facing are Arsenal: “I’ve got some friends who play for Arsenal, so playing there would be amazing. If we get through this round, we’ve got as good a chance as anyone of playing them.”

The successful Cup run of the 2010/11 did almost culminate in a trip to The Emirates, with Whites’ eventual conquerors Huddersfield Town being drawn against the Premier League leaders.

With eight games currently scheduled for December, the benefit of having a large squad is sure benefit the club over the next four weeks, and Bellamy believes still being involved in four competitions can only be a good thing: “Personally, the more games the better for me – I want to be playing every week and the fitness I mentioned previously will help us.

Quite how much of an impact any Cup runs will have upon the club’s league performances remains to be seen, but Bellamy feels this can be a successful season all-round: “I don’t think our league position at the moment is a fair reflection of how good we are. We’re 11th, but only three points from 4th, and still have the best defensive record in the league.

“I genuinely believe that we can be promoted this season. We’re good enough, and we all want it – there’s no reason we can’t get top spot.”

Asked about his notable hair colour – a question Bellamy is probably used to answering by now – he revealed a promise made to him by club director Alistair Bayliss: “He’s promised me that, if we do get promoted, he’ll dye his hair so it’s the same as mine – which I would love to see! It just started out as a bit of banter, but a couple of the lads actually like it – and if we do get a result on Saturday, I won’t change it back until we’re out of the Cup…”