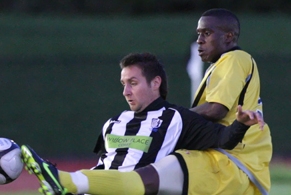 *BS*MARTIN HAYES has this morning completed the signing of central defender Bobby Aisien.

*BF*Aisien played for the Whites during pre-season against Carshalton and comes highly recommended from Rushden and Diamonds boss Justin Edinburgh.

Hayes said: “We needed some cover at centre-half, as we only really have Dean Hill as back-up in that position.

“Bobby was at Wingate and Finchley when I was there very briefly. I didn’t really know him that well as I was there for a short time and he was a very young player.

“But since then he has played in the Conference and is a strong lad. I am happy to take him on board to battle it out with the other lads for a starting spot.”