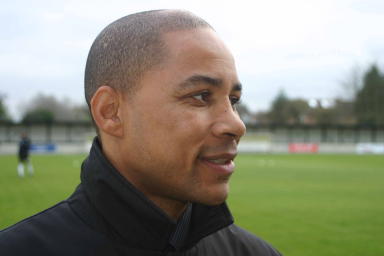 Steve Browne was furious after his team failed to take three points and collapsed in the second half against Wealdstone.

It should have been nine points out of nine from the last three homes game – which would have taken Whites within touching distance of getting out of the relegation zone.

But with Slough, fifth from bottom, having five games in hand, Salisbury are realistically the team to catch at the moment – and they are 11 points clear of Whites with a game in hand.

A serious situation and one that Browne does not need reminding.

He admitted: “It’s getting desperate and we seem to be missing that vital ingredient to turn good performances into wins. We have shown that we can play and have played good football in most of the games I’ve been manager here.

“We’ve got the desire to win and there’s not a single player here who doesn’t want to win. They’re desperate to do well for Dover Athletic and we’re disappointed that we’re not setting the world alight in terms of winning matches.

“But we seem to be missing that vital battling quality that you need when things are going against you. When you’re at the bottom, these kinds of things happen. You are up against it on the luck front but it’s important to battle and that’s something we’re not doing well enough.”

Wealdstone took an early lead and Browne insists there was not much his defence did wrong for that goal.

He said: “It was a superb strike and you have to just take those kinds of things on the chin. You just have to concede it was a good goal and that happens – but we responded well and got ourselves level.

“We got into half time at 1-1 and should have been ahead really. Then we continued to dominate after the break – but then bang, bang, bang. We’re 4-1 down and it’s all down to mistakes.

“It was a whole catalogue of errors and I just feel sometimes that we don’t get bodies in the way quick enough to break up opposition attacks. That’s something we need to change quickly because otherwise the situation is going to just get grimmer.”

Browne admits he may have to change his tactics and the way his side play. Also he may even bring in another fresh face or two – to add steel to the Dover side.

He added: “We might have to stop playing football and be uglier to watch. I don’t care how we play too be honest – we just want to win matches. That’s the key and perhaps that’s the way we’ve got to go.

“It’s all very well playing nice football but if you can’t battle then you’re on to a loser in a relegation dogfight.”

Browne had dinner with the directors on Saturday night and they discussed the club’s league situation – but the Whites boss revealed it was a good positive meeting.

He said: “They’re concerned of course, like me, and we discussed how things can change. We need to look at freshening things up a little bit and battle much harder than we are. The performances have been good but that’s not going to get us out of trouble.”