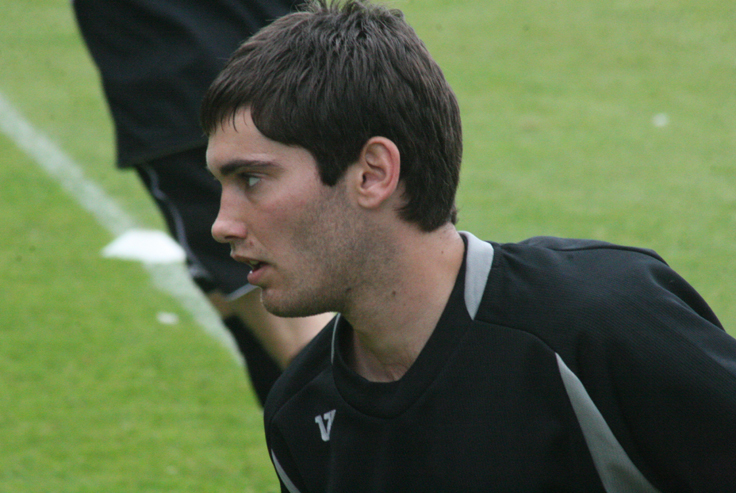 *BS*DOVER ATHLETIC star Lee Browning is recovering at home after a life-threatening accident in Saturday’s final game of the season at Tonbridge.*BF*

There was concern all around the Longmead stadium when, in the eleventh minute, Browning was on the receiving end of a fiercely driven cross from Tonbridge midfielder Tim Olorunda.

Browning immediately crashed to the ground and was out cold, but thankfully the life-saving efforts of physio’s Mervin Slight (Tonbridge) and Andy Hyland (Dover) with doctors prevented a tragedy.

Thankfully, a little dazed Browning, still in his kit, later returned to the ground to change before joining his team-mates on the coach back home.

“Lee was hit on the temple by the ball with some force, which knocked him out cold,” said the chairman.

“Unfortunately he swallowed his tongue. By the time our physio Andy Hyland got there he stopped breathing. Luckily they got him breathing again very quickly with the aid of the Tonbridge physio and we hope he’s going to be fine.”

“He’s on the mend, he’s conscious and he’s talking so that’s the main thing – that’s the key for us,” he said.

“After what happened (to Browning) it didn’t bother me what was going on. But as I say, the game’s over – we move on.”

Today’s events, sadly, marred the day that Dover Athletic broke a club record of collecting the most points in a season since the Whites clinched the Beazer Homes League title back in 1989-90.

“We’ve had a fantastic season, we’ve broken the club record today as well. That was our aim at the start of the game, but after what happened to Lee it was a non event for me as far as I’m concerned.

“What I will say is my players were absolutely outstanding today and a credit to the football club.

“We were comfortable, we should have won it a lot more second half (as) we had a lot of the ball. They put their right-back in goal and we didn’t test him when we should’ve. We could’ve done better in the final third, but that’s me nit-picking.

“To break a club record is fantastic; to get to 104 points in a season at any level of football; I commend all the players, the players from start to finish have been absolutely first class.”