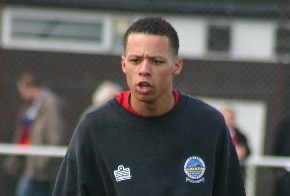 *BS*CHRIS CHASE will tonight be training at Dover Athletic – with a view to eventually signing a deal at the club.

*BF*The fans’ favourite, who played a starring role as a winger during a good run of form at the end of last season, has been told that the offer of a contract with the club is still on the table.

Jim said: “Chris was made an offer just after last season – and at that time he didn’t want to commit.

“However, that offer is still on the table and, in exceptional circumstances, we are prepared to juggle our budget to accomodate things. And Chris is certainly a player we are keen to sign.”

As previously well documented on this site, Chris was hoping to have trials at a couple of Football League clubs.

The former Watford trainee is keen to get into the professional game but he enjoyed his time at Crabble last season – and could yet still be prepared to pen a deal at Dover.