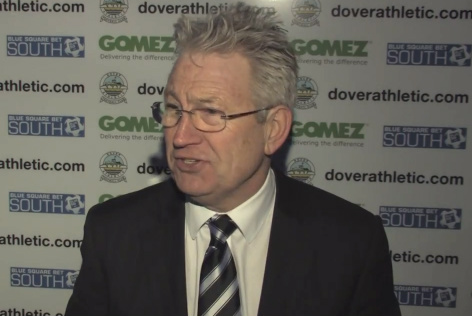 After seeing his team win successive home matches, Chris Kinnear was delighted with the fighting spirit the players showed in the 2-0 win over play off rivals Bath at a very windy Crabble. ‘I think we deserved it. After playing Tuesday night, I thought our legs would be heavy – It just shows the desire of the lads, especially as it was really difficult in the first half against the wind. We tried not to get frustrated and in the end we could have won by many more.’*Lpic1*

He also added’ They are a good side and you can see why they are on a good run. The lads were disappointed with how they played up to half time, but we told them not to beat themselves up what with the wind. I think we got stronger and stronger as the game went on.’

Bath played their part in what was an entertaining game and can consider themselves unlucky to have not taken anything from the game, in particular in the second half when Terrell Forbes struck his own post, only for the ball to be cleared to safety. According to the manager though, it was the fortune that Dover have been missing at times this campaign. ‘We have not had a lot of luck recently here, all of a sudden we got a bit of luck. In all honesty we should have won by a lot more.’*Lpic2*

This was the first time Whites have recorded back to back wins in the league at Crabble this season and the importance of home form is something Kinnear is all too aware of. ‘If I had to choose, I would pick home games over away games. We want to win every game – It does not matter who we play we want to win.

Chairman Jim Parmenter had already provided a report to the manager after a scouting mission to watch Bath whilst visiting the area with his wife last week and Kinnear joked. ‘The chairman’s report won us the game and he should give himself a win bonus!’*Q1*

Weather permitting, Dover face 4th placed Sutton United at Crabble on Tuesday night with Chris Kinnear having a fully fit squad to choose from for the second game running.