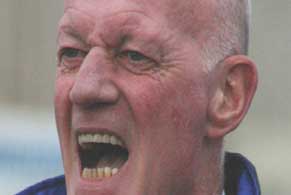 CLIVE WALKER knows time is running out on Whites’ chances of staying up – but victory against Hampton and Richmond will throw the club a lifeline.

The form of other sides at the bottom of the table has been poor and, if results go our way again this weekend, Walker’s men will be within touching distance of safety. Three points, in fact.

Easier said than done – but the Whites boss certainly has not given up the ghost.

He said: “It’s going to be a hard game against Hampton and Richmond. They’re in good form but we’ve got to win this one. Time is nearly up so if the team can pull a result out of the bag, we’ll be right back in with a late shout.

“Our chances of staying up could even be in our own hands if we can win the next couple of games against Hampton and then Tonbridge away.

“While it’s mathematically possible, you cannot give up. I’d certainly have taken this position when I first came back in January when we something like 15 points adrift from safety.

“We’ve got Craig Wilkins back fit now and he looked good up at Braintree. Also we’ve got the likes of Craig Cloke and Victor Renner back from suspension, which makes us stronger. Also Dean Readings is still available to play as his two-match ban does not start until Monday.

“Matt Carruthers was back at Braintree and he looked lively so we’ve got a stronger side than the one that lost to Folkestone. We could’ve done with these players in that game but that’s gone now. We’ve got to look ahead.”

Clive has already decided which players he wishes to retain for next season. The club hopes to be in a position to release a retained list soon after the season finishes. Every player offered a new contract will have one month to make their mind up – so Whites can plan properly for the new campaign.

He said: “This team is not bad. We’ve got a good pool of players but we just need to add a bit of experience and quality. I’ve got a number of irons in the fire and we will certainly have a stronger team next season than now, whatever happens at the end of the relegation battle.”

Dover chairman Jim Parmenter hopes fans will get behind the side for the last two home games – against Hampton and Richmond, then Eastleigh.

The game tomorrow is actually bigger than the Bank Holiday Monday match with Folkestone. The club are still in the same position – six points adrift – and can still get out of trouble.

Jim said: “We need the continued support of fans. They’ve been terrific this season and it’s vital they stick with us for this last effort to stay in the Premier Division. I am still optimistic we can do it We mustn’t give up.”