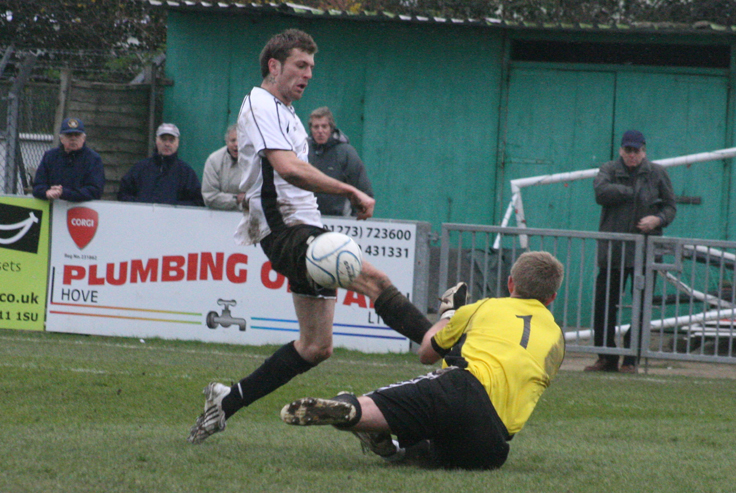 *BS*CRAIG CLOKE revealed how the Dover players had to listen to the Worthing team celebrate as though they had won the league title following Saturday’s last-minute defeat in West Sussex.

*BF*The Woodside Road club may well have grabbed three points and punished Dover for failing to take their chances.

However, the Rebels are miles behind Dover in their own bid to secure promotion to the Premier Division – which their manager Alan Pook is on record as saying he “could virtually guarantee”, according to media reports.

Clokey said: “Fair play to Worthing for beating us. They’re only the second team to beat us in the league this season (with Chatham doing the double over us). But they have not won anything.

“In fact, when we beat Worthing 3-0 at Crabble, you certainly didn’t see our players giving it the big one in the changing rooms afterwards. Andy Hessenthaler would never allow that. He has always said we do not celebrate and shout the odds until we actually have silverware in our hands.

“It was the same with Chatham. They celebrated as if they had won promotion. But, no disrespect to either club, I would rather be in our position than theirs – and you will not catch us giving it the big one until we have won the title.

“Their manager reckons they were going to win promotion this season – and, yes, they have a chance of that. But if I was one of them, I’d keep quiet until getting promotion.

“That’s something we used to do before Hess took over. We used to win a game, and celebrate – but now we just concentrate on winning the next game.”

Fans’ favourite Clokey believes the 1-0 defeat at Worthing will only serve to inspire his team-mates to bounce back with a win against Burgess Hill on Saturday – a result that could seal the title, if Tooting drop any more points.

*Q1*He said: “We huffed and puffed in the second half after outplaying them before half-time. Hess told us we were by far the better team in the first 45 minutes but need to take our chances.

“Sadly we just couldn’t get going in the second half and got punished for it – and you have to give Worthing credit for taking their chance.

“But it may be down to fate that we’re going to clinch promotion in front of all our fans at Crabble on Saturday. Dale Skelton (former Dover team-mate, now at Hythe) text me and said he reckons that is what will happen. It is just meant to be that way.

“We knew the Tooting game at Met Police was off and that we couldn’t win the title on the day but that is still no excuse. We just need to give it one final push to wrap things up.”

Assistant-boss Darren Hare said: “There was a bit of complacency that sneaked in. There was too much of a feeling that we have won the title. That has not happened yet. We have got to keep professional and get the required points to finish the job. Then we can celebrate.”