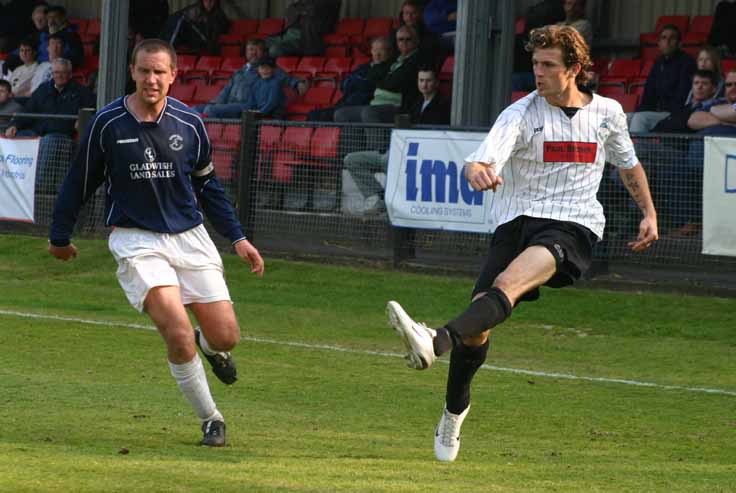 *BS*CRAIG CLOKE was celebrating the birth of a new baby boy this morning – and wants to make it a double celebration by starting the new season with a win at Horsham YMCA.

And it makes for a hectic week in the Cloke household, with the Hess Express departing for West Sussex on Saturday.

He said: “I can’t wait for the season to start. I’m enjoying my football now more than ever – and with a new baby it’s been a perfect week so far for me.

“We’re playing much better football now and not hoofing the ball all the time. Hess has got the lads knocking the ball around and it’s much more enjoyable playing that way.”

Clokey admits he has privately considered quitting the club – but family and close friends talked him out of it. And now, under the management of Hess, he is glad he opted to stay.

He said: “I want to win things and, apart from when I playing in the youth and reserve teams, I’ve not won anything here.

“It’s been a frustrating few seasons – playing in a side that has been relegated a few times and not been able to win promotion out of Ryman One.

“But there’s been a lot of changes this summer and Hess has really got everybody’s spirits up. I’m looking forward to this season. It’s a different approach. I’ve only really known mostly playing under Clive – so this is going to be the first time I’ve worked properly with another coach.

“Hess pulled me to one side and told me he had heard lots of positive things about me, wanted me to continue doing the good things in my game – and said he wanted to improve me as a player.

“Now I just want to get down to league action – and a perfect week will be rounded off nicely by three points at Horsham YMCA.”