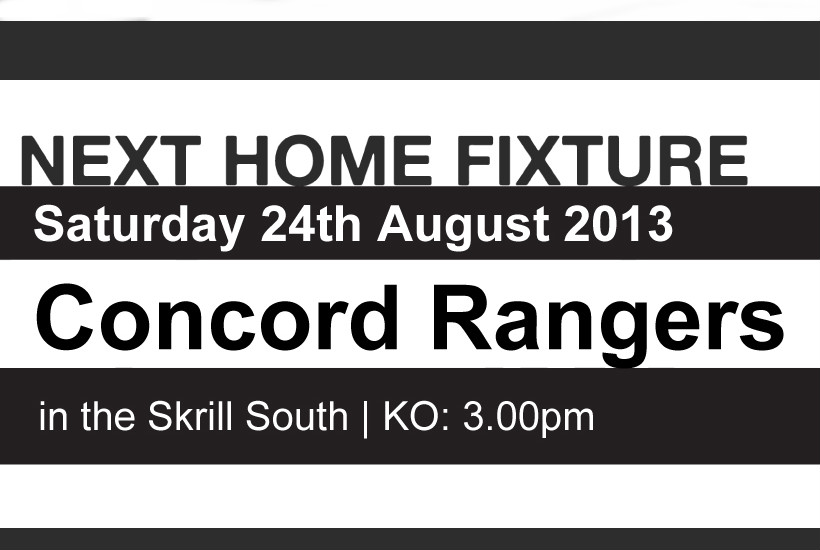 *BS*Jack O’Sullivan looks ahead to the visit of Skrill South newcomers Concord Rangers at Crabble. The Canvey Island club have goals in them and a history of overcoming the odds.*BF*

Conference football has returned to the town of Canvey Island for the first time since the 2006/07 season, but not for the eponymous Gulls – instead, Concord Rangers – based just three miles down the road – are looking to continue their climb up the pyramid.

It would be too easy to label Rangers as a side who will struggle this season. Indeed, they are priced up as one of the favourites to be relegated this season, although this is generally the case with newly-promoted sides.

During pre-season, I had the opportunity to speak to Alan Jessup-Peacock, chairman of the Concord Supporters Association. He feels his side are being underestimated, and have a chance to prove people wrong this season – as they have done repeatedly in the past: “Over the years I’ve followed this team, they have consistently been marked as the underdogs, labelled as a small pub team from Canvey Island that nobody has heard of.

“Although it may sound like a cliché, that simply spurs these guys on to upset the odds. Just look at the derbies against Canvey Island – five wins from six by the ‘smaller’ club, and nobody dared have the club down for promotion last season. Overcoming the odds is what these guys do.”

Their promotion to the Conference South came via the playoffs, where they defeated a much-fancied Lowestoft side who had scored over a dozen goals in the previous three meetings between the two.

With 8th and 14th place finishes in their first two seasons, manager Danny Cowley strengthened his side in the summer of 2012 and set his side a target of a play-off place for the coming season. They managed this, and the aforementioned victory over Lowestoft ensured their place in the Skrill South for this season.

Rangers definitely have goals in their side, finding the net 495 times in their last six seasons – just over two goals per game. Jessup-Peacock believes his side can continue this attacking style of play, stating “our strikeforce is strong, and we have a group of midfielders that will flourish at this level.”

One key player that will miss the first couple of months of the season is their captain, midfielder Tony Stokes. Having risen through the youth academy at West Ham, Stokes has pedigree at a higher level and after his release from The Hammers, the 26-year-old played for Rushden & Diamonds, Brighton, and Stevenage, and also had a spell in Hungary with Újpest FC.

*Q1*With 78 goals in 124 games from centre midfield, Stokes has been influential in Concord’s rise up the pyramid and his return from an injury sustained in pre-season can’t come soon enough for the Essex side.

Midfielder Sam Collins has returned to Thames Road after a successful spell at East Thurrock United, where he picked up four end of season awards for the Ryman Premier side.

Also joining from East Thurrock is striker Sam Higgins, who could fill the goalscoring void left by Stokes. Regarded as one of the most potent forwards outside of the Conference Premier, Higgins scored over 100 league goals for East Thurrock in four seasons and spent time at Chelmsford City and Dartford before agreeing terms with Concord.

Rangers averaged just 193 fans at home last season – a figure which was improved upon in their inaugural Skrill South match against Basingstoke Town, where 306 were in attendance to watch The Beachboys suffer a 2-1 defeat. Despite this loss, Concord would have been pleased with their performance, more than matching their opponents for large periods of the game.

They also performed admirably on Tuesday night at Chelmsford, with goals from John Easterford and Jason Hallett earning Rangers their first point of the season in a 2-2 draw – but on the balance of play, they arguably deserved all three.

Saturday’s match will be one that Chris Kinnear will want to maintain Whites’ good record against newly-promoted sides. Last season, Dover won all four games against sides promoted from the Ryman Premier – Billericay Town and AFC Hornchurch – and they will be looking to do the same if Whites are going to push for a play-off place again this season.

It would be dangerous to underestimate Concord and Whites will need to remain respectful towards a side with a lot to prove this season.