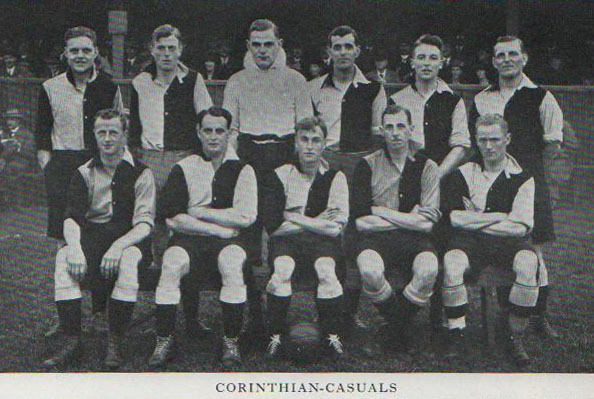 *BS*FANATICS of Dover Athletic have their minds fixed on the final 12 matches of the season, whether they like it or not.*BF*

If you’re like me, you’ll find yourself looking at the fixtures and table too often – needing something to take your mind elsewhere.

It is fortunate then that our next opponents provide such a rich story to absorb. Whites’ game this Saturday is away to Corinthian-Casuals, a club steeped in its own history.

So how much does the current Corinthian-Casuals reflect the history involved and the famous “Corinthian spirit”? To find out, I shall pass on the work of AH Fabian and Geoffrey Green, who edited Volume One of ‘Association Football’, published in 1960.

Chapter 10 of the volume is devoted to the Corinthians, written by Norman Ackland, former amateur football correspondent for several national newspapers in the early-to-mid part of the 20th century.

Ackland writes: “Just as their greatest rivals, Queen’s Park, Glasgow, founded Scottish football, so the Corinthians founded English football, and it is not too much to say that they were the greatest influence in the game’s formative years during the last decade of the last century.”

Ackland tells how Corinthians FC was set-up to help England beat the Scots, who had won eight matches in nine games against their bitter rivals in the nine years prior to 1882, the date of Corinthians’ birth.

He continues: “If the immediate reason for the foundation of the Corinthian Football Club was to raise the prestige and standards of English international football against Scotland, its effect was of far greater importance. Within twenty years the Corinthians were to become the greatest and most attractive team that football had then known.”

*Q1*Ackland quotes Alfred Gibson and William Pickford, who credited Corinthians as the club which kept Association Football alive in its times of uncertain future.

They wrote in their book ‘Association Football and the Men Who Made It’: “The Corinthians undoubtedly kept the game going in the south during those dull and dead seasons which followed the decline of the old teams, such as the Wanderers and Clapham Rovers, and preceded the establishment of professionalism in London and south of the Thames.”

Ackland says of the club’s success: “During the first twenty-five years of it existence… its players had filled one-third of the places in the England XI against Scotland, and nearly the same proportion against Ireland and Wales; while on two occasions, against Wales in 1894, and again in 1895, it had provided the whole England team.”

Even in the less successful periods on the field, Corinthians retained huge public appeal. The club averaged over 30,000 spectators in the 19 FA Cup games they played between 1923 and 1933, including a 60,000 attendance against Millwall.

The club’s success was difficult to maintain, however. Ackland tells of the demise of Corinthians: “The increased speed and intensity of the professionals began to dominate the game, and the fanatical nationalism that the 1930s produced in Europe also provided a background to international football which gave little room for the recreational amateur alongside the well-drilled professional.

“Matters came to a head when a Corinthians’ tie at the Crystal Palace attracted only 2,000 people. The committee realized that something must be done if the club was to remain in existence, and a scheme was evolved to put them on their feet again.”
*Ppic1*
In 1939 it was decided to amalgamate with the Casuals, a club which also pooled players from public schools and universities.

It had been thought, until very recently, that the Casuals were formed in 1883, one year after Corinthians. This is stated in ‘Association Football’. However, it now appears that Casuals were the first formed, back in 1878.

It would also appear that much of what Dover fans will see on Saturday comes from the Casuals side of the club’s history.

“Although Casuals amalgamated with the famous Corinthians in 1939, the combined club still kept up the normal Casuals’ routine, playing in the Amateur Cup, the Isthmian League, the London Senior Cup and the Surrey Senior Cup.”

The more things change, the more they stay the same.

While the Corinthian-Casuals that Dover Athletic encounters this weekend may be a different club to its forefathers, we can admire the rich history of the club and its impact on the game we love – even if our minds are not on the Corinthian Spirit but on gaining another three points in our quest for promotion.