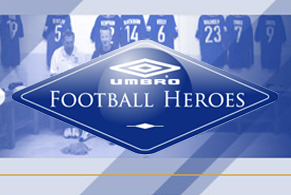 *BS*DOVER couple Richard and Tracey Crutchfield have been heralded as football heroes by Alan Shearer.

*BF*They came out tops throughout the region in the unaugural Football Heroes awards from Umbro for their incredible contribution and dedication to football in the local community.

Richard, 44, is the chairman of 24 teams from the Dover Athletic youth section while Tracey, 41, is the secretary of 14 sides from Dover Rangers Colts, which is incorporated into Dover Athletic. Having received an outstanding number of nominations, Richard and Tracey will now be put forward as the South East representative for the national UMBRO Football Heroes award.

Richard told doverathletic.com: “It’s amazing, we are so honoured to receive this award from UMBRO, but it’s not just about us. This award is for all the people who help us out at the club and in the community to make this club so special.”

Together, Tracey and Richard spend every spare minute ensuring the smooth running of their beloved community teams.

It is an amazing feat when you consider that Richard works full time and is often on call at night, while Tracey has her hands full with three kids, one of which requires 24-hour care.

Each year they undertake the arduous task of organising a trip for more than 70 club members to attend a Spring Festival of Football at a Holiday camp, one which is greatly appreciated by all that attend.

Their hard work and commitment has enriched the lives of hundreds of individuals and families in their community through football.*Q1*

The UMBRO Football Heroes awards ambassador, Alan Shearer, said: “Richard and Tracey are true football heroes. Their contribution to the game and their community is immeasurable.

“It’s people like Richard and Tracey that make the game possible at a grassroots level. It’s fantastic that UMBRO can recognise their heroic contributions with this prestigious award.”

Nominations for Richard and Tracey flooded into umbrofootballkits.co.uk following UMBRO’s launch of the Football Heroes awards.

The awards were created to honour football’s true heroes; the unsung volunteers, parents and supporters which make up the nation’s ‘football workforce’, keeping the amateur game thriving at all levels.

Ed Hughes, FA Development Manager for UMBRO said: “The response from the South East was tremendous, making it a really tough decision, but Richard and Tracey thoroughly deserve to win this prestigious award in recognition of their hard work and dedication to the game.

“Their passion for football is clearly evident with nothing ever being too much trouble for them when it comes to the clubs and the local community.”

The couple have had their own tale of football heroism immortalised on a unique plaque, which was presented to them at SeaFrance Crabble yesterday.

They also win tickets to a top game at Wembley Stadium, and will take delivery of a set of UMBRO playing kits and training equipment for the club.