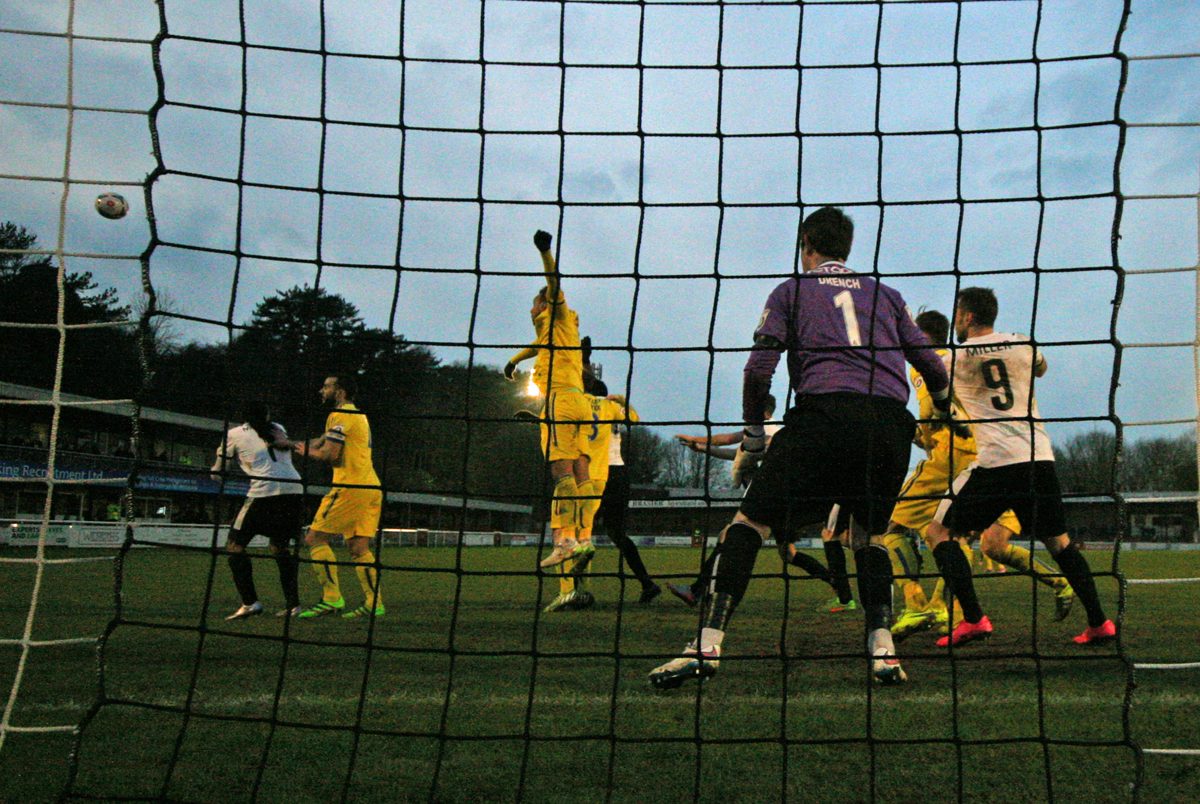 *BS*February featured four fixtures for the Whites, including three FA Trophy matches and one league game. Despite having three games called off for a variety of reasons, Dover managed to score ten goals, winning two games and drawing one.*BF*

*BS*Dover Athletic 2-2 Guiseley – FA Trophy (Round of 16) – Saturday 6th February*BF*
Dover were drawn against Guiseley in the round of 16, hoping to take one step closer to Wembley in the FA Trophy competition.

It turned out to be a tough match for the Whites, taking both sides 20-25 minutes to get started. Both sides were threatening and Parkinson coming closest with his effort being cleared off the Guiseley goal line. Despite this initial encouragement from Dover, Guiseley’s Hatfield fired into the corner of the net in the 36th minute to give the away side the lead. Dover’s opposition almost made it 2-0 minutes later however the shot went just wide of the mark.

The Whites came out in the second half determined to put in a better performance and were almost instantly rewarded when Deverdics’ free kick smacked the cross bar. The Guiseley goal was finally breached in the 60th minute, thanks to a Jack Parkinson goal from close range, following a corner kick.

Dover worked hard and went looking for another, however it would be the away side who would regain their lead, after Dover goalkeeper Andy Rafferty appeared to be fouled in the area, but with no free kick given, Rothery slotted home. It would take a last minute goal from substitute Ofori-Acheampong to level the scores and set up a replay 10 days later in Yorkshire.

*BS*Dover Athletic 4-0 Gateshead – Vanarama National League – Saturday 13th February*BF*
Taking a brief break from the FA Trophy, Dover returned to league action, hosting play-off rivals Gateshead at Crabble. Dover were one point ahead of the Tynesiders and were looking to make up ground, having missed several league fixtures due to called off fixtures and postponements due to the FA Trophy campaign.

Mitch Walker came into the side, his first appearance since November 7th against Stourbridge. While the away side were dominating the play for the first 20 minutes, Ricky Miller would be the first player to score against Gateshead for more than five matches. Miller bagged a 20 minute brace, scoring from an acute angle in the 24th minute and again just before half time.

In between Miller’s goals, Deverdics coolly placed a shot into the corner of the net, having exchanged a clever one-two with Ricky Miller, both it seemed having a profound effect on the proceedings.

Dover remained rampant for the entire game and despite the Gateshead goalkeeper saving excellently from Miller for his hat-trick, Payne headed the rebound into the net. Dover showed their intent to return to the play-off places and did so in fantastic fashion.

*BS*Guiseley 0-3 Dover Athletic – FA Trophy (Round of 16 replay) – Tuesday 16th February*BF*
Dover had saved the tie in the dying minutes at Crabble and travelled up to Guiseley to decide the tie and progress to the final stages of the competition.

Due to a flooded pitch, this was the first game in more than two months, and the Whites were determined to not make it a happy return for the Yorkshire side.

On the stroke of the 23rd minute, Guiseley became a man short, having lost Hatfield to a red card for a tackle on Modeste. Just seconds later, Payne raced onto a sublime pass from Deverdics to open the scoring for the Whites. It would be an uphill battle for the home side, being a goal and a man down in the opening half hour. Dover were eager for more and forced the opposition goalkeeper into making a string of fantastic saves to keep his side in the game.

Despite an impressive attacking display from Dover, the Whites wouldn’t score again until the 78th minute, this time Deverdics again scoring to make the game all but settled. Payne added the icing on top with his second and Dover’s third in the last minute of the game, beating the oncoming Guiseley goalkeeper and walking the ball into the net. This victory would set up an away fixture against Nantwich Town in the quarter-finals of the FA Trophy.

*BS*Nantwich Town FC 2-1 Dover Athletic– FA Trophy – Saturday 27th February*BF*
Dover went into this fixture wary of the threat that the home side could pose, having lost previously to Stourbridge- in the same league as Nantwich- earlier on in the season and against Bath City in the same stage the season previous. A victory here would set up a two-legged semi-final and a genuinely great chance of playing at Wembley Stadium, a fantastic accolade to possess.

A goalless half was one to forget for both sides, with the game coming to life in the 55th minute, when Nantwich counter-attacked following a Dover corner and slotted past Walker into Dover’s net. The home side were very much up for this fixture and did not relent in their ambition to attack, despite going 1-0 up.

Richard Orlu managed to score for the Whites to level things up, after Deverdics fired in a cross from a free-kick, and it appeared that a replay might be on the cards. However, Nantwich’s Shotton had other ideas and scored the winner for the home side in the 93rd minutes, much to the heartache of the travelling fans and players. Dover bow out of the FA Trophy having scored 11 goals in 5 games in the competition, and although saddened to have been eliminated, the club can now focus 100% on the upcoming end to the season.

A very busy month lies ahead with a play-off place up for grabs and games in hand over all of their play-off rivals; March will be the defining month for the Whites’ play-off chasing efforts, so come and support the boys in their fantastic push for promotion!