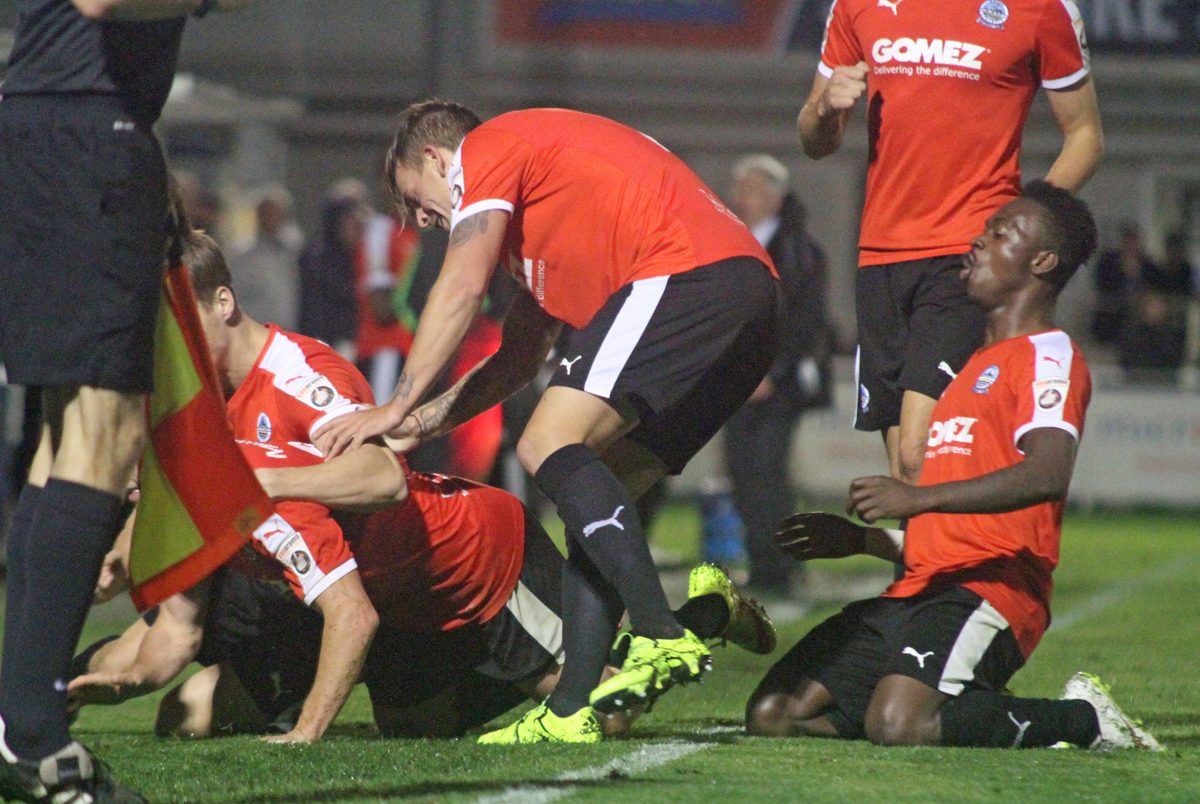 *BS*Month two of the 2015/16 season saw the Whites play in 7 games, four at home to Braintree Town, Guiseley AFC, Bromley and a televised Friday night BT Sport Live fixture against Woking FC. The remaining 3 matches were away from Crabble at Southport, Cheltenham Town and Eastleigh FC.*BF*

*BS*Southport*BF* (A) – 0-0 draw
Dover’s first match of September took the team away from home to Southport. The Whites came to the Merseyside club on the back of a 6 game unbeaten spell, which had propelled the team to 7th place. Ricky Miller came closest for the visitors, midway through the half, smashing a shot from 25 yards onto the Southport crossbar, having made a driving run up the field. Dover were putting the pressure on the home side and this almost paid dividends when Sean Raggett’s header was cleared off the goal line.

The home side also had chances of their own, hitting a shot against the post of Mitch Walker’s goal and Sam Magri and Jack Parkinson making vital blocks. Although the Whites began to link up well in the second half with the introduction of pacey winger Aswad Thomas and despite driving forward and creating more chances, Dover found they couldn’t quite find that extra bit of luck that would have allowed them to win the game. The Whites rebuffed some late Southport pressure to earn their 3rd draw away from Crabble this season and remained in 7th place at the end of week 8 of the Vanarama National League season.

*BS*Cheltenham Town*BF* (A) – 3-2 loss
Dover Athletic fans will not likely forget the previous time the boys in white last made the trip to Gloucestershire to play Cheltenham Town. That 1-0 Second Round FA Cup win in December 2014, courtesy of a fine Connor Essam strike against the then League Two club, took the Whites through to the 3rd Round setting up a mouth-watering tie against Premier League Crystal Palace. This match would be an entirely different affair, with both teams having very few players still at their respective clubs from 2014’s game. Dover manager Chris Kinnear commented before the game that “what’s past is past and that this was a different challenge”. The Robins had brought in a new manager and with him a new squad of young players, eager to impress.

Fans were still entering the ground through the turnstiles when Stefan Payne was judged to have been fouled in the penalty area and Nicky Deverdics gave the Whites an early lead inside the first 4 minutes, having coolly slotted the resulting penalty into the goal net. Ricky Miller had a glorious chance to double the lead of the Whites, but hit the ball over the goal from close range. However a defensive error from Cheltenham was pounced upon by Stefan Payne, who struck his shot powerfully past the diving Cheltenham goalkeeper to become Dover’s joint top goal scorer this season with Deverdics (3 goals) and make it 2-0 to Dover. The Whites were not able to go into the half-time break with a clean sheet, as Cheltenham managed to get a goal back before the break, after a good finish hit under Dover ‘keeper Mitch Walker.

The Whites found a Robins side who had come out full of confidence after finishing the half stronger and their near-constant pressure was rewarded in the form of a penalty kick, after Dover full-back Magri was judged to have tripped a Cheltenham player in the box, despite the Dover players believing that the foul was committed outside the area. The impetus was with the home side, who were greatly encouraged by coming back level from two goals down. With Dover’s Payne being sent off for a second yellow card, the match winner only looked like coming from one team. An excellent half-volley made the score line 3-2 to the hosts, who had fought hard to turn the match around. Lessons have surely been learned by a relatively young Dover side, who will go into Tuesday’s game against Braintree looking to make up for the disappointment of the loss.

*BS*Braintree Town*BF* (H) – 0-0 draw
The following Tuesday (15th September) Braintree Town came to Crabble. The Irons arrived having won their previous 3 away games against Kidderminster, Welling and Bromley. A victory would have completed the set of away wins over the 3 Kent sides in the National League. Braintree continued their fine away form in the first half, but were unable to test Dover’s goalkeeper Walker. Jack Parkinson at the other end was denied by an excellent block by Braintree defender Matt Paine. The Whites regrouped in the half time break and came out stronger, with Bellamy coming close for the hosts.

The Irons looked dangerous on the break and it took a fantastic sliding challenge from Aswad Thomas to deny Akinola, in front of goal. Ricky Miller’s free kick then forced Town’s goalkeeper to make a decent save. Dover pressure was mounting and the home side thought they had won themselves a penalty kick for a handball following a corner kick, only for the original corner kick to have been deemed to be hit out of play. During a later corner kick in the Braintree half, Dover were reduced to 10 men following a fracas inside the penalty area, with Parkinson being sent for an early bath. Dover managed to withstand some late Braintree marauds to come away from the game with one point apiece.

*BS*Guiseley*BF* (H) – 0-0 draw
Four days later, Dover welcomed newly-promoted Guiseley, who were adapting well to National League football, unbeaten in their last 4 matches and coming back from 2-0 down to Woking FC to draw in a 4-4 thriller. Despite numerous chances to clinch a win, the Whites could not knock down the Guiseley door, resulting in the second draw in as many games.

Stefan Payne was denied in a one-on-one with the Guiseley ‘keeper who managed to palm away Payne’s effort. Ricky Miller was brought down in the area, but his claims were waved away by the officials and Ofori-Acheampong’s shot from the loose ball was well saved at the far post. Sean Raggett had a golden chance to fire past the Guiseley goalkeeper but headed his effort onto the crossbar, following a Nicky Deverdics free kick. This latest result saw the Whites slip slightly down the League table to 14th, with a potentially tricky away fixture at Eastleigh next up.

*BS*Eastleigh*BF* (A) – 5-2 win
The team travelled to play last season’s play-off semi-finalists Eastleigh on Tuesday 22nd September. The Whites started brightly and were rewarded with a Ricky Miller goal in the 17th minute of play. Miller received the ball from a throw in and went on a driving run, beating one player and then placing his shot into the bottom corner of the net. Miller ended his goal-scoring dry patch, having not scored since the win over Kidderminster in August.

Dover were pegged back following a neat cross in and header by the home side in the 29th minute. The Whites were not disheartened and managed to score a second in the 3rd minute after the restart, following Stefan Payne being fouled in the penalty area. Deverdics coolly slotted home from 12 yards past ex-Dover goalkeeper Ross Flitney. The sides were again on level terms following an excellent free kick, which beat the Dover wall and goalkeeper. Many might have thought that the Whites might now play for a draw, being away from home on a Tuesday night, but Dover showed their desire to show off their attacking prowess and went on to take the lead once more.

The Eastleigh goalkeeper was sent off for a last man foul on striker Stefan Payne, allowing Deverdics to double his total for the game from the penalty spot. The extra man favoured Dover’s cause, allowing the Whites to seal the three points with two further goals, to make it 5-2 on the night. Tom Murphy came on to make his first appearance since sustaining an injury in the second game of the season and showed the visiting fans what they had been missing when he scored from a free kick in the 82nd minute. Ricky Miller completed the thumping with a contender for goal of the season, shooting from 35 yards out, to score off the underside of the crossbar, 4 minutes from time. The win moves the Whites up the table to 10th, closing the gap on the play-off places to 3 points.

*BS*Woking FC*BF* (H) – 2-0 win
Crabble was the host of BT Sport on Friday 25th September for a Vanarama National League fixture live on BT Sport 1. The Whites would play in front of cameras which broadcasted the game internationally as well as throughout the United Kingdom. Woking were the evening’s opponents, themselves looking to move into the play-off positions, one point behind 5th place.

For the second match in a row, the Whites were gifted a fantastic chance to go ahead early on in the game, when winger Toby Ajala was bundled over in the area in the 2nd minute. However, the Whites were unable to convert the opportunity with the Woking goalkeeper saving the resulting penalty. The disappointment of the missed chance soon went, as Deverdics’ pass 30 seconds later sent Payne clear of the Woking defence, leaving the striker to place the ball between the legs of the oncoming goalkeeper to make it 1-0, sending both fans and players into euphoria. Dover were brimming with confidence and in the 9th minute, Thomas’ cross narrowly missed connecting with the on-rushing Ajala at the far post. Woking were yet to seriously challenge Mitch Walker’s goal and the teams went into half time with the Whites leading 1-0.

While Woking did have their chances, they failed to capitalise on periods of pressure. The Whites’ persistence and attacking play forced Woking goalkeeper Cole to make decent saves from Miller and Ajala, before substitute Ofori-Acheampong set up Stefan Payne to fire past the Woking ‘keeper and make it 5 goals in 5 games against Woking for Payne and three wins in a row for Dover against the side from Surrey.

Dover’s Friday night win in front of the BT Sport cameras meant that the team were placed in 5th with 21 points, until Saturday’s results from elsewhere in the League left the Whites 2 points off the play-off positions in 8th.

*BS*Bromley*BF* (H) 2-0 loss (Kent Senior Cup)
An experimental Dover Athletic side, featuring up and coming academy players bowed out of the Kent Senior Cup 2-0 to Bromley on Tuesday night at Crabble. Two second half goals from a strong Bromley line-up were enough to see off the Whites side. Much praise was heaped on the young players who featured for Dover, who showed confidence and composure on the ball all throughout the game. Alfie Paxman looked particularly lively, with his pace and skill causing Bromley problems on many occasions.