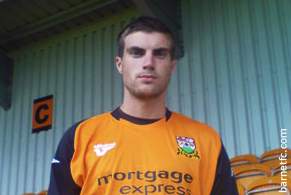 *BF*Leach, 24, is a left-footed player and will go straight into the starting XI for tomorrow’s Blue Square south clash with Bath.

Whites boss Andy Hessenthaler said: “Daniel is a very cultured player, has good pedigree and is a true pro.

“The lad is a very chirpy Aussie and comes highly recommended from Ian Hendon, the Barnet manager. Darren Hare has watched him and was very impressed.

“He’s made a few appearances for Barnet but the boy needs regular matches under his belt and Ian is happy for him to come to Crabble for more experience.

“Unfortunately Matty Fish has done his back so Daniel will step straight in against Bath. I felt we needed a left footed player and Daniel fits the bill.

“We’ve been after Daniel for quite a while but Ian has had a few injuries at Barnet, which delayed the deal going through. It’s for one month initially but there may be a chance of extending that if all goes well.

“Daniel comes in at just the right time for us, with a lot of important games coming up, as we hit the business end of the season.”