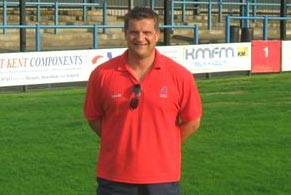 *BS*DOVER ATHLETIC assistant manager Darren Hare revealed the squad actually trained on the morning of the match before their comfortable win (against Faversham on Saturday).*BF*

“It was a training game, we had two separate teams,” Hare told www.kentishfootball.co.uk, as their first game ended in victory.

“We trained this morning so it was always going to be their first 45 minutes under their belts for a fitness point of view really.

“We was pleased with some of the build up play but we weren’t really worried about the result as I’m sure Justin (Luchford) wasn’t for Faversham.

“It was all about getting through all the players 45 minutes with no injuries. We’ve worked really hard and have a few with tight hamstrings and tight thighs so it was good to get them through that.”

Hare admitted he was impressed with the players, who are currently on trial at Crabble.

“We thought all of them did themselves no harm at all today,” he praised. “I thought Jerahl Hughes had some very good moments during the game. He’s obviously got a lot of pace and I thought Josh (Maasbach) done well at centre half in the second half.

“In fact all of them, for me, contributed. Nathan (Bailey), the lad up front, has got a little bit up front as well.

“We’ve obviously need to have a look at them, before making a decision if we’re going to sign them or not.”

“Well, they’ve both come through word of mouth really, which happens a lot in football,” he said.

“Lloyd’s an ex-Brighton apprentice, been let go by Brighton, and Josh is an ex-England schoolboy international, but he hasn’t played for about four or five years.

“So for me for a young lad who hasn’t played for that length of time to put in a defensive show that he did today means he’s probably got a lot more potential to come.”