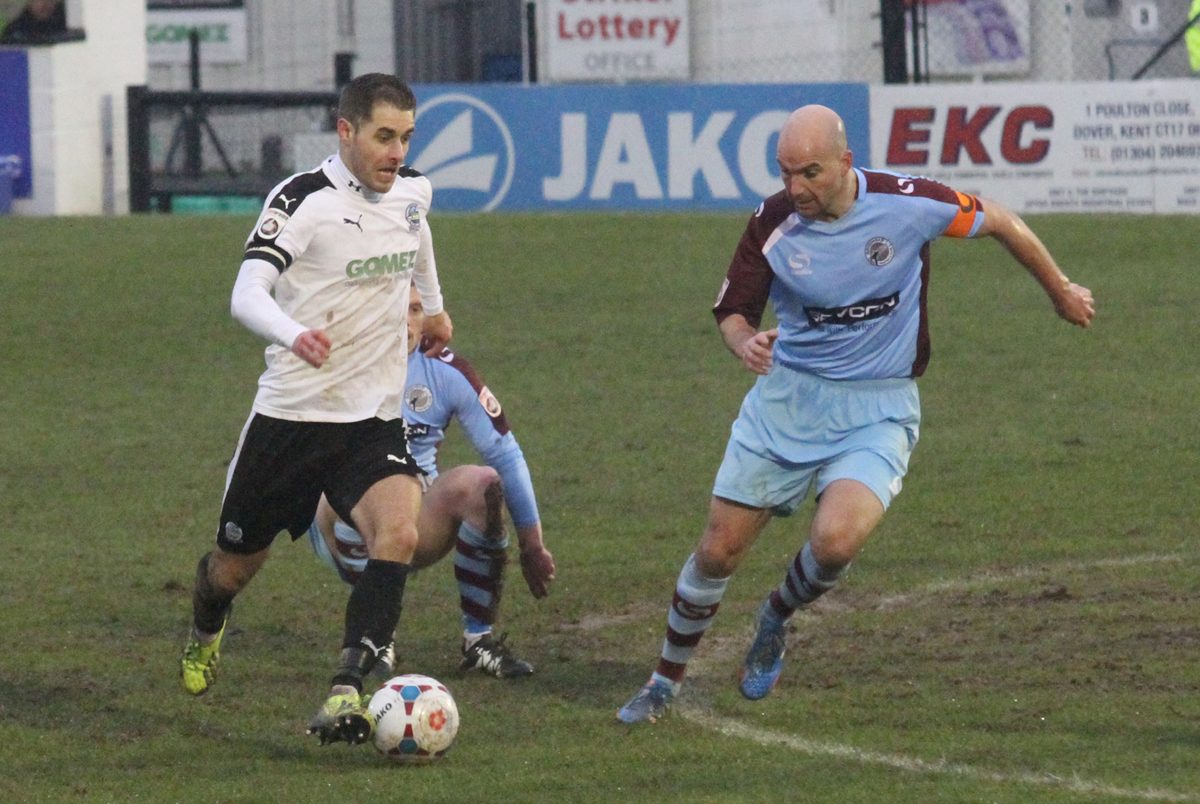 *BS*Whites midfielder Nicky Deverdics says he is enjoying his football – and is determined to make this season a successful one, both for himself and for the side he has assumed the captaincy of.*BF*

Deverdics, 28, is one of the more experienced players in the current squad – and says that stands him in good stead when he puts on the captain’s armband before each match. Speaking at the club’s training ground, he said: “It’s a role I am really enjoying. You feel that extra sense of responsibility, and you feel like you have to put in a good performance each game because you are the leader of the side.

“It’s something I like doing, and I can see myself continuing to captain a side further into my career.”

Tuesday’s FA Trophy victory at Guiseley was Deverdics’ tenth match in succession as captain, with six wins picked up in that time. The 3-0 win in Yorkshire saw Whites progress to the quarter-final stage of the FA Trophy for the second consecutive season. Deverdics played a starring role, assisting Stefan Payne for the first goal and then scoring the second, to seal a comfortable win.

Next up in that competition for Deverdics and his men is a trip to Cheshire a week on Saturday to face Nantwich Town, who ply their trade two leagues below the Vanarama National League.

That, according to the ex-Newcastle United trainee, represents a favourable draw. He explained: “I think we all would have taken that draw in the quarter-final. On paper, it is better than going away to a side like Grimsby, with all respect to Nantwich – it is a game we will feel confident for.

“We have had a couple of blips before against sides we probably should have beaten, such as Stourbridge in the FA Cup earlier this season, but the draw represents a good opportunity for us.”

Whites’ successful season so far means that they are still fighting on two major fronts. As well as the last-eight stage of the FA Trophy looming large, the side are also occupying a playoff place in the league – but neither takes priority, according to the midfield maestro: “We are going out there to try and win every game, regardless of whether it’s the league or the Trophy.

“We have done well so far this season but we know we can keep it going. It is just about taking it one game at a time now. We have good team spirit here, and everybody is ambitious and knows their role within the team, and we all know what we want to achieve.”

On a personal level, it has been an excellent season for Deverdics so far. With 14 goals and 16 assists, he has played an influential part in Whites’ attacking play and is on a red-hot run of form – with three goals in his last four games.

As for his own personal targets, he explained: “I just want to better the stats I got for the side last season. I am enjoying my football, and we have got a good group here. I said in the summer that I would only stay if I really felt we could have a crack at it this season, and that’s what we are doing.”

Up next for Whites is a trip to Macclesfield Town on Saturday, who – like many others the side are now facing week in, week out, are a former Football League team. That is a tag that Deverdics plays down, however: “You hear a lot about how a side used to be in the League, but it doesn’t make much difference to me.

“I think that, with our performances last season and how we have done so far this time, we have earned the respect of the other sides in this league.”