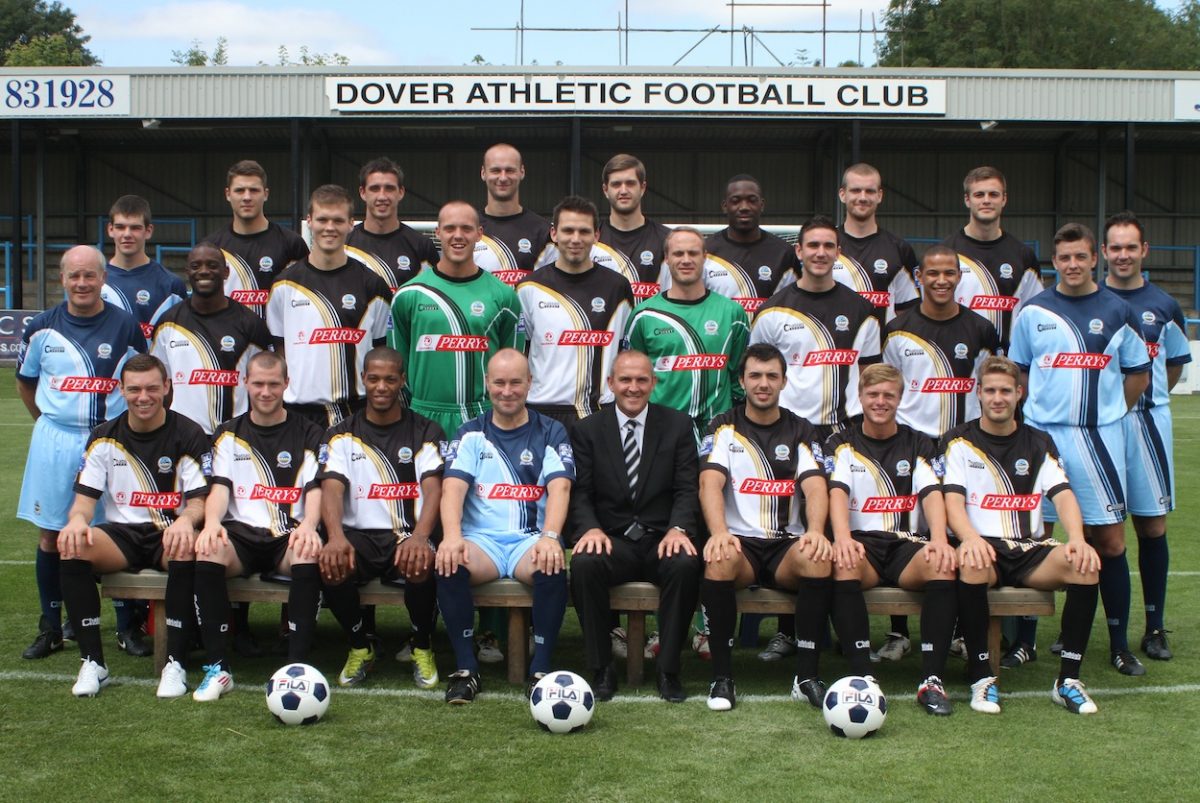 After another eventful summer at Perrys Crabble, Martin Hayes’ side get down to competitive business on Saturday against Dorchester Town.*BF*

An exciting set of new signings and a promising pre-season bodes well for Whites’ hopes of a title challenge. Hayes has added a talented blend of experience and youth to replace the departed players.

Life is rarely dull at Dover Athletic, particularly off the pitch, and the close season just gone has been no different. Following a disappointing end to the last campaign and players leaving the club, Martin Hayes was forced to rebuild his squad.

As fans wondered how the manager was going to replace departing players such as Matt Fish, Jon Wallis, Ross Flitney, Adam Birchall and Rob Gillman, Hayes was working on bringing in five Blue Square Bet Premier regulars and a BSB South champion.

The signings of Shane Huke, Michael Corcoran and Matt Johnson from Rushden & Diamonds put down a marker of Martin’s intent, before following it up with Ed Harris from AFC Wimbledon, Steven Watt from Grimsby and Phil Starkey of Braintree.

*Lpic1*It is still early days to predict season outcomes but Whites have clearly manoeuvred themselves into a strong position to challenge alongside the likes of Woking, Chelmsford and others for promotion.

Plenty of sides have strengthened this summer, including potential surprise packages in Boreham Wood, Basingstoke, Sutton and Truro. Local rivals Dartford and Welling are sure to be around the play-off places too, having held onto key players and strengthened in certain areas.

Martin Hayes has a few absentees for the first game of the season. Captain Michael Corcoran is suspended following an FA punishment related to a Rushden match last season. Joining him on the sidelines are Steven Watt, recovering from a dislocated shoulder against Arsenal, and Sam Cutler, who cut his foot on glass at home.

The Dover boss wasn’t entirely happy with his side’s performance at Billericay last weekend, despite a comfortable 3-0 win, but said the game provided exactly what he was looking for.

He told yourdover.co.uk: “To be fair I got the awkward, tough game I wanted. The pitch wasn’t that great, they were having a go and I thought we were quite sloppy at times.

“It was pleasing in some ways because it means you can have a few words with the players and give them a kick up the bum. I’d rather have a tough game before the start of the season than beat a lower side 5-0 and then get caught out in the first league game.”

Dover’s opponents this weekend have had a long and mixed pre-season schedule but manager Ashley Vickers is confident his team can spring a surprise at Perrys Crabble on Saturday.

Vickers said: “Pre-season has been a long six weeks but I think the lads are itching for the game at Dover now so let’s hope we go down there and produce a really good performance.

“I know when we go to Dover we’ll be firing on all cylinders because we are very fit and playing at a good tempo. We will take it to them.

“I do feel we have more of a goal threat this year and Chris Flood is a good signing for us. We bent over backwards to get him to stay.”

*Lpic2*If club captain Mark Jermyn features in Saturday’s game, it will be his 499th appearance for the club in his 12th season since joining as an 18 year-old. The stalwart was awarded a testimonial against Portsmouth. He is doubtful with a hamstring strain.

Dorchester also boast the creative talent of ex-Yeovil playmaker Nick Crittenden, but at the back they could struggle with two key defenders missing.

Centre back Gary Bowles is serving a five match suspension from the end of last season, while left back Jake Smeeton has a broken toe.

Bowles is still with the club despite strong interest from AFC Bournemouth. Dorchester have reportedly rejected two bids from the Football League club for the 22 year-old.

On the prospect of losing Bowles, Vickers added: “I know Bournemouth are expressing a keen interest in Gary and I think they see him as someone they can develop to play at that level.

“I’m waiting to hear on developments. I want to see him progress and think he’s got the ability to play in that league eventually, but I also want my best players at this club.”

*BS*Finally…*BF* BBC Radio Kent commentator and Dover supporter Matt Gerrard has previewed the Blue Square Bet South season from a Kent point of view. He analyses the prospects of the county’s five teams in the division. Read his column here: *Link1*