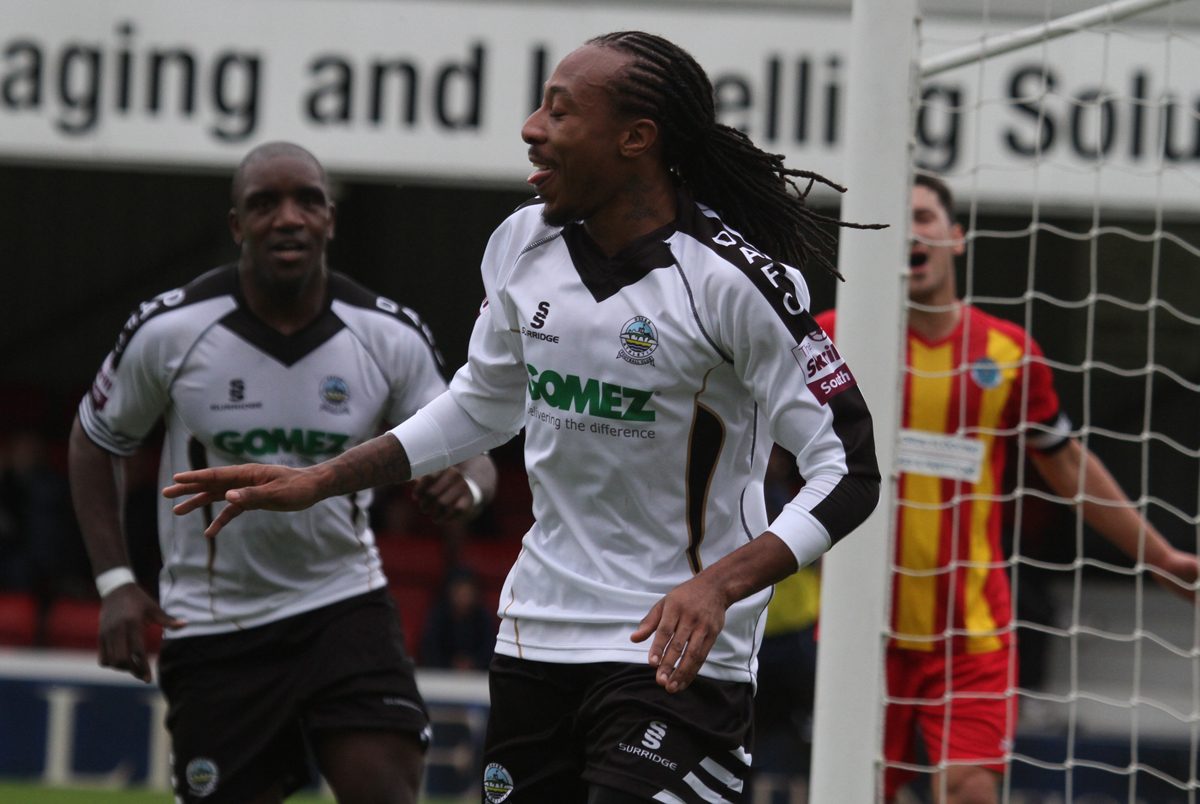 *BS*Whites travel to Dorset on Saturday to face Dorchester Town in the Skrill South, knowing that a win could see them just two points from a playoff place. The Magpies are bottom of the division, with just four victories all season.*BF*

Last weekend’s defeat in the FA Trophy, a 3-2 loss at Eastleigh, has left Dover Athletic with just two competitions to focus on this season – the Skrill South and the Kent Senior Cup.

The former will certainly take priority and, despite an indifferent period of form in the league, Whites are still within touching distance of a place in the top five.

All three points on Saturday could lift Chris Kinnear’s side up as high as 7th place, dependent on other results, which would help to ease the disappointment of last weekend’s defeat at the Silverlake. The midweek fixture between the two sides was postponed due to a waterlogged pitch, giving the side a full week to recover for Saturday’s match, and it is arguably the ideal match for Whites to get their league campaign back on track.

Form away from home has been far superior to that at Crabble – 19 of the side’s 29 points gained thus far have come on their travels – and facing a rock-bottom Dorchester Town side should be comfortable enough. There are no guarantees in football, least of all in this division – Bromley’s first home defeat of the season on Tuesday night, against Concord Rangers, is evidence of this – but The Magpies’ torrid season is showing no sign of improving.

Having won just one of their last six matches at The Avenue Stadium – a 2-1 victory over fellow strugglers Tonbridge Angels – Dorchester find themselves six points from safety, having played four games more than the side above them. Dorchester are yet to defeat a top-half side at home in the league, and have conceded a league-high 48 goals in their 21 matches thus far. At home, they have shipped 26 goals – again, the highest in the division.

The reverse fixture, in October, saw Whites win 1-0 in a scrappy contest ultimately decided by a first-half strike from Ricky Modeste. The Magpies pressurised late on to almost steal a draw, but a fantastic performance from goalkeeper Mitch Walker ensured the visitors would go home empty handed.

Despite the narrow one-goal victory, the reality is that the margin of victory should have been greater – in addition to a strike from Tom Murphy being ruled out, Nathan Elder saw a penalty saved by goalkeeper Alan Walker-Harris and goalscoring chances also fell to Moses Ademola and Elliott Charles.

Dorchester come into the game on the back of a three-match losing streak, having suffered defeats against Eastleigh (2-1), Weston-super-Mare (3-0) and, most recently, a 5-0 loss away at Boreham Wood. Town had gone into the half-time interval just one goal down, but a second-half capitulation further added to their woes.

Previous history between Whites and Dorchester has primarily seen Kinnear’s side come out on top – in the past nine meetings, five victories have been recorded, with The Magpies victorious on only one occasion. On that day, back in January of last year, a 1-0 defeat turned out to be Nicky Forster’s last match in charge of Dover Athletic as the side slumped to their fifth consecutive defeat.

Much has changed since that day, and the side enter Saturday’s fixture confident of picking up maximum points. Sean Raggett and Chris Kinnear Jr served their suspensions against Eastleigh last weekend and are now eligible for selection once again, and both should return to the starting line-up which could see Michael Kamara and Barry Cogan respectively drop to the bench.

A fresh face for Chris Kinnear to consider has arrived in the shape of striker Jeff Goulding, who signed for the club this week after his release from fellow Skrill South side Chelmsford City. The 29-year-old has made over 150 Football League appearances and gives Kinnear another option in attack, which may prove vital bearing in mind Nathan Elder’s three-match suspension which begins in just over a week’s time.

Moses Ademola has returned to the club from his loan spell at Ryman Premier side Canvey Island, where he scored four goals in 12 appearances for the Essex side, and is also available for selection. Ricky Modeste is also believed to be ready to return to action, as the winger has now recovered from injury problems which have plagued him for the past couple of months.