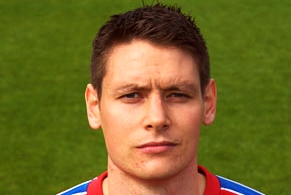 *BS*Dover Athletic have signed former Chelmsford striker Rob Edmans on loan from Dagenham & Redbridge until the end of the season.*BF*

Rob is well known to Dover fans having scored four goals against us for Chelmsford in four games between 2009 and 2011.

In 2009/10 the 25 year-old was a regular weapon from the substitutes bench for City and performed that role at Perrys Crabble last season when he scored the equaliser in Chelmsford’s 3-2 victory five minutes after coming on.

From that point on Rob became a regular in the starting line-up and scored both goals against Whites in the 2-2 draw at Melbourne Park. Dagenham & Redbridge signed him in July 2011 on a two-year contract.

Rob started his football career in 2006 playing college soccer in the United States for the Virginia Tech Hokies. Upon his return to England he trialled with Southend United before joining Tiptree United then Maldon Town in 2007/08.

He impressed Chelmsford during a pre-season game in 2009/10 when playing against the Clarets for Witham Town and went on to score 19 goals in 70 appearances for the Essex club.

Rob is available for selection on Saturday, when Whites taken on Staines at Perrys Crabble.