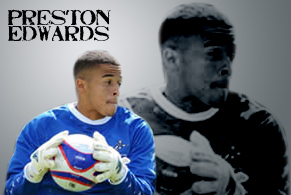 *BS*ANDY HESSENTHALER has pulled off a coup by signing one of the country’s most-promising young goalkeepers.

*BF*Millwall stopper Preston Edwards, 19, has penned a one-month loan deal with the Whites, following confirmation this morning that John Whitehouse has broken a collarbone and will be ruled out for the rest of the season.

“Edwards comes with a great pedigree,” said Whites boss Andy Hessenthaler. “He’s been capped at England Under-19 level and played a game for Millwall’s first team. He’s obviously young and one for the future – and we needed to sign someone to cover for John.”

The keeper, who met his new team-mates in training tonight (Thursday), came under recommendation from Millwall chief scout and former Wimbledon boss Stuart Murdoch, an old pal of the gaffer.

Hess admits he has not seen the keeper play yet but trusts the judgement of not only Murdoch, but Lions boss Kenny Jackett, who used to manage the Dover boss when he was a player at Millwall.

He said: “My No2 Darren Hare has seen the kid and he’s clearly someone who has been well-schooled. He’s played for his country and having spoken to him today he can’t wait to get down here.

*Ppic1*”The boy is excited about training tonight and can’t wait to get into the team. We’ll obviously be having a good look at him.”

Meanwhile, Hess wants to respond to a recent comment on a website elsewhere, which suggested he was rueing not signing Dave Wilkinson until the end of the season from Crystal Palace after his recent loan spell came to an end.

The gaffer said: “I just want to clear that one up. We brought David here to give John some competition for a month. John had suffered a blip in form and sometimes it’s good to take a player out of the firing line, and bring someone else in to add competition.

“We didn’t have enough money in the budget to actually have two quality keepers on the books. It was always going to be short-term.

“Since David went back to Palace, John has been in top form and he suffered the injury making an absolutely superb save.

“Now unfortunuately John has got injured and the chairman has had to stretch the budget so we could bring in Preston. We’re now over-budget.

*Q1*”So it was all down to finances with David in the end – because of course I’d love to have John and David both on the books. But, in reality, that was not going to happen.”

Chairman Jim Parmenter believes that the transfer activity is “probably over” for the time being, with Frannie Collin, Jon Wallis and Alan Pouton nearing full fitness.

“But Andy may at some stage later in the season start thinking about players for next season – so watch this space.”