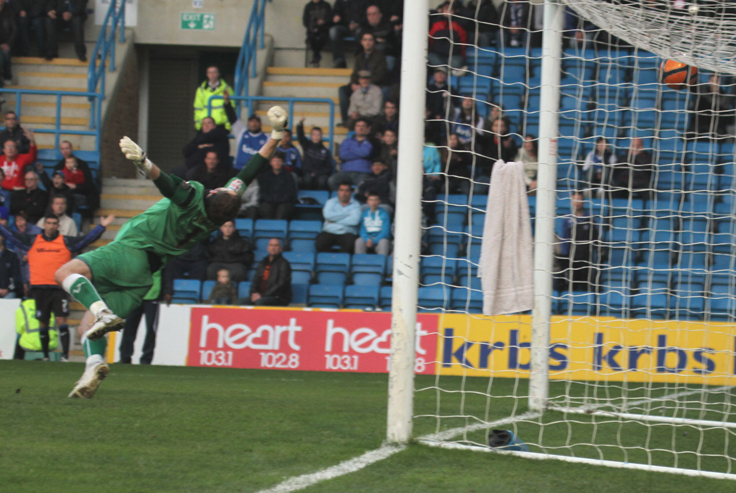 *BS*Attention switches back to the FA Cup this weekend, with Whites travelling to Northamptonshire to face Southern League Premier side Corby Town.*BF*

After a 2-0 defeat to Basingstoke Town in the Skrill South last Saturday – which ended a run of eight matches unbeaten in all competitions – the change in focus will be most welcome as Dover look to emulate their famous FA Cup run of three years ago.

The side were due to face Eastleigh in the league this Tuesday, which would have given players one final chance to impress before Chris Kinnear finalises his side for this clash, however a waterlogged pitch saw the match postponed – a fate also suffered by Corby, who saw their planned fixture at home to Banbury United fall foul to the weather.

Town’s match last weekend was also postponed due to a waterlogged pitch, so the side are yet to play in November – their last game, a 3-0 victory over struggling St Neots Town, means that they enter this weekend in a positive frame of mind and should offer Whites a tough game.

Currently sitting in 16th place in the Southern League Premier, Corby have won four of their opening eleven matches, with three of those victories coming at their Steel Park home. The most impressive of these came against league leaders Chesham United – who have won 12 of their 15 matches thus far – back in September, where Town won 2-1.

Corby won promotion to the Southern League Premier in 2006, and despite an indifferent couple of seasons here, promotion to the Conference North was achieved in the 2008/09 season. Their first season in the North saw Town narrowly miss out on the playoffs; their sixth placed finish, just one point behind Droylesden, was an excellent achievement and gave The Steelmen hope that they could go one further the next season.

This wasn’t the case – increasingly poor league finishes in the Conference North over the next three seasons saw the side drop back into the Southern League last season by the narrowest of margins – finishing level on points with 19th placed Histon, they were relegated by virtue of their goal difference being just one worse than Histon’s.

Former Queens Park Rangers defender Chris Plummer was in charge during this period, but just two games into this season he resigned – following 3-0 and 6-0 defeats to Burnham and Hemel Hempstead Town respectively. Plummer’s assistant Mark Peters, himself an ex-professional defender with spells at Peterborough United and Leyton Orient, was appointed interim manager. Despite picking up ten points from his five games in charge, Peters was not given the opportunity to take charge of the side on a permanent basis as Andrew Wilson and Tommy Wright were appointed joint-managers in the middle of September.

Pitted against Skrill North side Colwyn Bay, Corby were underdogs to progress but an impressive 3-1 victory against Frank Sinclair’s Welsh side sealed their place in Saturday’s tie.

Despite making this stage twice in the past three seasons, Town have not reached the second-round since 1965/66 season and will view Saturday’s match as a chance to emulate this. Indeed, both sides will – this tie is one of only six all non-league matches, and only two feature sides both currently playing below the Skrill Premier Division – with Biggleswade Town’s trip to Stourbridge the other fixture.

Dover’s most recent notable exploits in this competition came back in the 2010/11 season, where a first-round win over Kent rivals Gillingham was followed up by a victory over Aldershot Town, sending Whites through to the third-round for the first time in the club’s history – a remarkable day ended in a 2-0 defeat away at Huddersfield Town, but the memories live long from that day.

Corby’s side features of number of players with Football League, and higher, experience – captain Gareth Jelleyman spent seven years at Peterborough United and made over 100 appearances for The Posh, whilst the capture of Mark Arber in the summer following his release by Dartford added nous to the side, although this had predominantly been off the pitch.

The most high-profile of Town’s squad is Lee Hendrie. The ex-England midfielder joined from Tamworth two months ago and, despite some troubled times in his personal life, the 36-year-old now seems settled in non-league football and his experience and undoubted talent should be instrumental to any success Corby do have this season.

It is not yet known whether Ricky Modeste will be fit for Saturday’s clash, but if the midfielder is able to start the game then he surely will. If Modeste misses out once again, manager Chris Kinnear will likely decide whether to keep faith with Liam Bellamy in midfield, or bring in a more natural wide man in the form of either Moses Ademola or Michael Bakare.

Nine goals from three games means the FA Cup is, so far, not a competition Whites have struggled to find the net in – top scorers in these games are Nathan Elder, Sean Raggett and Barry Cogan, all of whom have found the net twice.

The Modeste issue aside, Kinnear is likely to keep the faith with the remainder of the side who suffered defeat to Basingstoke on Saturday, meaning that Elder should once more lead the line for Whites.

This weekend’s clash will also see history made, with referee Amy Fearn set to become the first woman to take charge of an FA Cup first-round tie.