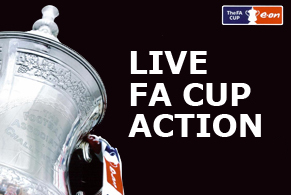 *BS*ANDY HESSENTHALER will not be taking Whites FA Cup opponents lightly when they arrive at Perrys Crabble on Saturday.*BF*

Sussex County Division Two side East Preston may play their football four levels lower than Whites currently do but as Dover fans know all too well, league status and form has little influence in FA Cup ties.

Hessenthaler has experienced both sides of a giant-killing as a player and manager and, having watched East Preston last weekend, will not allow his players to be complacent.

The Dover boss told the KM East Kent Mercury: “We will treat it like another league game. We will give them respect. We have watched them and they have two or three individuals who could play at a higher level. We can’t be complacent.”

The story wasn’t too dissimilar last season. Having beaten Tonbridge away in the 1st qualifying round, Hess’s men were drawn at home to Ridgeons Eastern Counties League side Needham Market.

Two goals inside the first 22 minutes past former Dover stopper Darren Smith calmed the nerves but as Whites stepped off the gas, Market pulled one back before half-time and it wasn’t until the 89th minute that Jerahl Hughes made the game safe.

That game may also hint at the kind of line-up the Dover boss will select this Saturday against East Preston. Despite having played a local derby against Ramsgate four days previous, Hess selected the same starting eleven for Needham Market.

*Q1*Hessenthaler could name an unchanged team, following Saturday’s tense 2-1 victory against Bath. Though there are the usual injury worries, as we’ve come to expect this season.

Jake Leberl, Adam Birchall and Dean Hill are all doubtful with knocks. Frannie Collin is expected to be sidelined for another week at least, and Matt Fish is still a month away.

Better news for Dover is that Danny Walder came through the full 90 minutes last Saturday, a rare pleasure for him so far this season, and Adam Birchall was able to come on and score two excellent goals in the 2nd half. Shaun Welford could also feature on the substitutes bench.

A further bonus is that on loan striker Andy Pugh will be available for selection after Gillingham boss Mark Stimson granted him permission to play. Whites also hope to name ex-Welling midfielder Craig Rocastle, expected to join the club on a non-contract basis at first, in the 18-man squad to face East Preston.

Speaking of our visitors, they look set to enjoy their day in South East Kent to the full. They have already knocked out higher-ranked opposition this season, including Guildford City in the last round after a replay. In both games of that tie, Guildford looked to be home and dry with seconds to play.

In the first game, Guildford were 3-0 up after 55 minutes. East Preston quickly pulled one back before going 4-1 down. A remarkable comeback in the final 20 minutes, including an equaliser two minutes into stoppage time, forced a replay at East Preston.
*Lpic1*
If anything, the replay was even more dramatic. East Preston opened the scoring after 20 minutes but Guildford struck twice in the 72nd and 82nd minutes to go ahead. It again looked as if Guildford would progress but in the fifth minute of time added on Matt Windsor headed in the equalising goal.

According to the Guildford City match report, both sides were too exhausted to score during extra time and East Preston held their nerve in the penalty shoot out to win 4-3 and book their place in the 2nd qualifying round.

Their joy at making it through and anticipation of Saturday’s tie at Perrys Crabble is tangible. East Preston boss Trevor Waller told the Littlehampton Gazette: “I have never known anyone at the club to look forward to a match as much as this.

“Obviously, they’re a tasty side, and we’re the lowest-ranked team left in the competition, playing the highest.

“But we’ll go into it playing our normal style of football. We have a lot of pace up top so there is always a chance of us scoring, it’s about us trying to keep it tight. We will be going to give them a decent show.”

Patience may be the necessary virtue for Dover players and fans alike on Saturday. The magic of the FA Cup is sure to make it a memorable day, whatever happens!