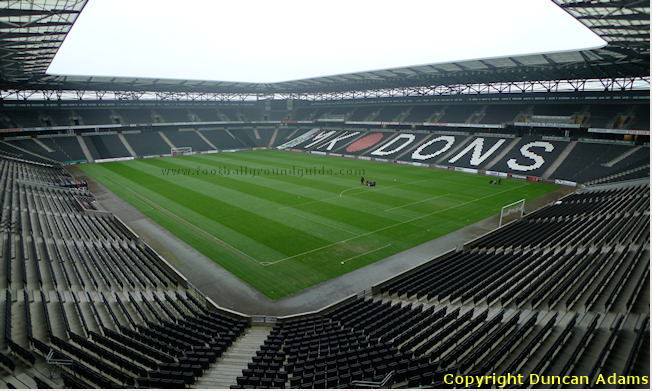 *BS*Dover Athletic return to FA Cup action this weekend, with a trip to MK Dons in the second round sure to provide a memorable day for the club. Jack O’Sullivan previews the big match.*BF*

Nearly four weeks after the draw for the second round of the FA Cup was made, Dover Athletic are now able to fully concentrate on this weekend’s clash against MK Dons – and, despite the gap between the sides, there is a real level of self-belief within the squad.

Since Whites’ first round victory against Corby, wins over Bath City, Chelmsford City and East Thurrock have seen the side extend an impressive run of form, stretching back to the middle of September. Dover’s last fourteen matches in all competitions have yielded eleven wins, two draws and just one defeat.

Still being involved in four competitions entering December – the Skrill South, FA Cup, FA Trophy and the Kent Senior Cup – is certainly a rare occurrence for the club, and is testament to Chris Kinnear’s stated desire to win each match regardless of the opposition or occasion.

Two weeks ago, Kinnear commented: “There would have been a time early in my management career when I would have prioritised the league, but nowadays I just want to win every game.”

Tuesday night’s FA Trophy replay against East Thurrock was successfully navigated, with goals from Nathan Elder and a brace from substitute Liam Bellamy sealing a 3-1 victory. With a home tie in the next round against Skrill North side Leamington, there is hope that this season can be a fruitful one across the board.

Saturday’s match will be Whites’ second ever appearance at this stage of the FA Cup, following on from the successful campaign in the 2010/11 season. A first round win away at Kent rivals Gillingham set up a home tie with then-League Two side Aldershot Town for a place in the third round, and progression was sealed courtesy of a brace from Adam Birchall in a 2-0 victory.

A trip to Huddersfield Town in the third round was where the side’s cup run ended, however. Two goals in the opening eight minutes proved too much of an obstacle to overcome, but the memories from that day live long in the memory and the chance to emulate that run is a fantastic opportunity.

MK Dons’ best ever performance in the Cup came last season, when wins over Cambridge City, AFC Wimbledon, Sheffield Wednesday and Queens Park Rangers set up a fifth round tie at home to Barnsley. It was the visitors who progressed to the quarter-final stage however, winning 3-1 at Stadium mk.

Draws have been quite fortunate to Dover thus far, with the side – before now – not facing higher-league opposition. The road to Saturday started at the end of September, with a 3-2 victory over Guernsey, courtesy of goals from James Rogers, Nathan Elder and Ricky Modeste.

AFC Rushden & Diamonds were dispatched 3-1 in the third qualifying round, thanks to strikes from Sean Raggett, Barry Cogan and an Aaron Parkinson own goal – Cogan and Raggett found themselves on the scoresheet once more in the final qualifying round at the end of October, where Skrill North side Oxford City were comfortably dispatched in a 3-0 win.

League One and Two sides were potential opponents in the first round, but Whites were drawn away at Corby Town. Two second- half headers, from Nathan Elder and Chris Kinnear Jr, propelled Dover into the next round with a 2-0 win – Corby did have their chances to take the lead, but Mitch Walker’s impressive first-half display arguably kept the side in the competition.

Given their league status, MK Dons have only featured in one match thus far. Drawn against mid-table Skrill Premier side Halifax Town, Dons eased to a 4-1 win in front of a crowd of just over 4,000. Izale McLeod netted a brace in this match, but has since joined League Two side Northampton Town on loan.

Being drawn against non-league opposition once again will give Dons fans hopes of progressing to the next round, but manager Karl Robinson remains respectful: “Once again, we will not be taking it lightly. We’ll do our usual match preparation session on them, just as we would for any League game. They won’t be coming here just for the party, they’ll be coming here to win the game. Regardless of the difference in Leagues, it’ll be 11 men versus 11 men and on any given day, anyone can come out victorious.”

Top goalscorer for MK Dons this season is Patrick Bamford. The 20-year-old striker, on-loan from Chelsea, has hit thirteen goals so far and is the stand-out threat in attack. Bamford’s loan deal at the club expires in a month’s time, and with Championship sides queuing up to borrow the England under-21 international, Dons need to make the most of the time they do have with him still in their ranks.

Former Manchester United man Alan Smith adds international experience to Robinson’s side, and the loan signing of Dale Jennings was recently announced. Jennings, who moved from Tranmere Rovers to German side Bayern Munich in July 2011, did well during Dons’ 3-1 loss last Saturday and is a real threat.

That home defeat to Coventry is the latest in a string of disappointing results. Whilst Dover’s recent form is impressive, Dons’ is anything but – eight defeats from their last eleven matches see them sit in 12th place in the League One table with the pressure starting to mount on Robinson. The three victories claimed during this spell have all come at home, however.

MK Dons’ superior results at home can be matched against Dover’s away form. On the road, Whites have won five matches out of eight and conceded just four goals. In the Skrill South, Kinnear’s side still have the best defensive record in the league, having conceding only nine goals in 14 games.

Midfielder Ricky Modeste faces a late fitness test ahead of the match, as he struggles to overcome injury – the winger played for 50 minutes in Tuesday night’s FA Trophy replay against East Thurrock, but questions remain regarding his match fitness. Once again, the majority of the side picks itself, with the only doubt being Modeste’s potential inclusion.

Saturday’s referee will be Lee Collins, who took charge of Dons’ 2-0 victory over Sheffield Wednesday in this competition last season.

*BS*What is your prediction for Saturday’s big match? Use the ‘User Comments’ section below to have your say.*BF*