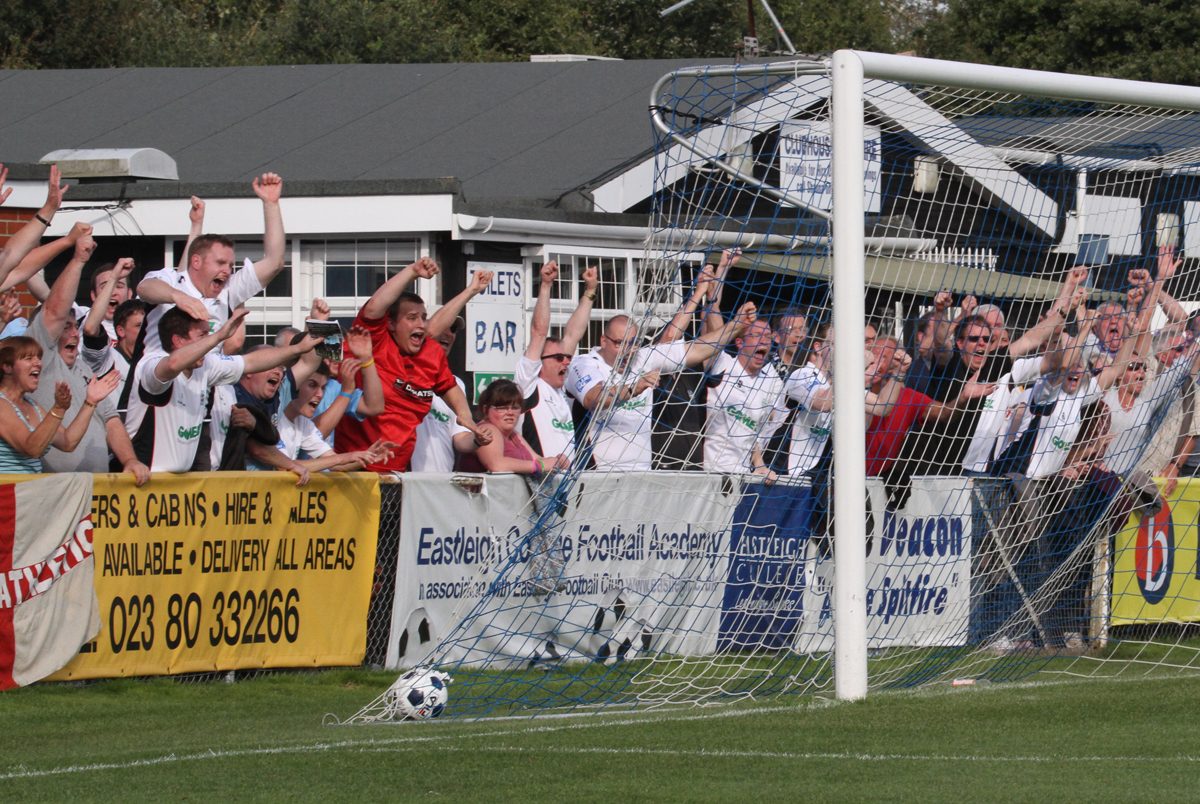 *BS*Dover Athletic travel to Hampshire on Saturday to face Eastleigh in the FA Trophy, with a place in the quarter finals at stake. Whites have won on their last five visits to the Silverlake Stadium, but will be missing two key players through suspension.*BF*

In a season that has not offered much consistency thus far, one positive has undoubtedly been the side’s progress in the knockout competition.

A memorable FA Cup run ended with an unfortunate 1-0 defeat away at MK Dons a month ago, a Kent Senior Cup quarter-final is in the offing against local rivals Dartford and the last 16 stage of the FA Trophy has been reached for the first time since the 2009/10 season.

The draw for the third round saw Whites avoid Skrill Premier sides including Cambridge United, Luton Town and Grimsby Town, instead pitting the side against fellow Skrill South outfit Eastleigh.

Of the sixteen sides left in the competition, ten play their football outside of the top flight of non-league football, offering hope that the Premier’s recent stranglehold on the Trophy can be ended. Grays Athletic’s victory in the 2004/05 final was the last time a side from outside the Conference Premier won the title.

Whites travel to Eastleigh on Saturday with recent head-to-head form at the Silverlake Stadium firmly in their favour – the last five matches between the two in Hampshire have ended in five victories for Chris Kinnear’s men.

The most recent of these was the first leg of last season’s play-off semi-final, where Athletic claimed a well-deserved 3-1 win thanks to goals from Moses Ademola, Ben May and Daryl McMahon. Prior to that, the side recorded 3-1, 3-2, 2-0 and 2-1 victories on their travels to the home of The Spitfires, and the last time Eastleigh recorded a home victory over Dover was back in the 2004/05 season.

Eastleigh have enjoyed strong financial backing in the past couple of years, and have put last season’s play-off heartbreak well behind them – after 19 league matches, Richard Hill’s side have picked up 42 points and find themselves in second place, eleven points behind Bromley – but with three games in hand.

Their home form this season has been crucial to the league position they sit in. Winning seven of their ten matches on their own ground, and losing only once, Eastleigh have one of the best home records in the league and have only conceded five goals in the process. However, the majority of their home victories have been by a 1-0 scoreline – twelve goals scored in ten matches at the Silverlake shows that whilst they don’t concede many at home, there is also no fantastic firepower displayed by a number of other sides in the division.

This attacking threat will be depleted by the absence of striker Stuart Fleetwood, who scored the winner when the two sides met at Crabble three weeks ago. Fleetwood starts a suspension earned following his sending-off against Bath City in the final game of 2013.

Dover will also be without two key men due to suspension, with defender Sean Raggett and midfielder Chris Kinnear Jr ruled out. The pair have been two of Whites’ most consistent performers this season, and their absence will make the task in hand even harder. Craig Stone is likely to replace Raggett in defence, and Barry Cogan can expect to earn a recall to the sign in the place of Kinnear Jr, however both modifications to the side will require a tactical shuffle as neither are naturally like-for-like replacements.

Familiar names in the Eastleigh squad include goalkeeper Ross Flitney and midfielder Glen Southam, both who have enjoyed spells at Crabble in recent times.

Both sides have won three ties in the competition so far, with Whites defeating Bath City (2-0), East Thurrock (1-1, 3-1 after replay) and Leamington (2-0). Nathan Elder, James Rogers and Liam Bellamy all have two goals to their name in this season’s FA Trophy.

Eastleigh’s victories have come over Maidstone United (2-1), Bury Town (3-0) and Gateshead (2-0). Striking duo Craig McAllister and Ben Strevens lead The Spitfire’s scoring charts in the competitions, both with two goals.

Their victory over Skrill Premier side Gateshead in December was impressive; their opponents, currently 8th in the league above, fielded a strong side but were undone by goals from Jamie Collins and Stuart Fleetwood.

Eastleigh have won their last five games in all competitions, starting with that win against Gateshead – since then, victories have been achieved over Dover, Dorchester Town, Bath City and Eastbourne Borough. The last three have all been by a scoreline of 2-1.

Whites, on the other hand, have only won two of their last five outings, against Kent rivals Tonbridge Angels and Ebbsfleet United. The side’s last match saw them 2-0 up against Bishops Stortford at half time, but a calamitous second half saw three goals conceded to continue a poor season in front of the Crabble crowd.

This home record may mean that Kinnear’s best opportunity to progress in the FA Trophy may be on Saturday, instead of bringing Eastleigh back to Crabble on Tuesday night. Eastleigh have the best away record in the Skrill South, as displayed in their recent victory on the Kent coast.

Along with a place in the quarter-finals, prize money of £7,000 is on offer for Saturday’s winners.