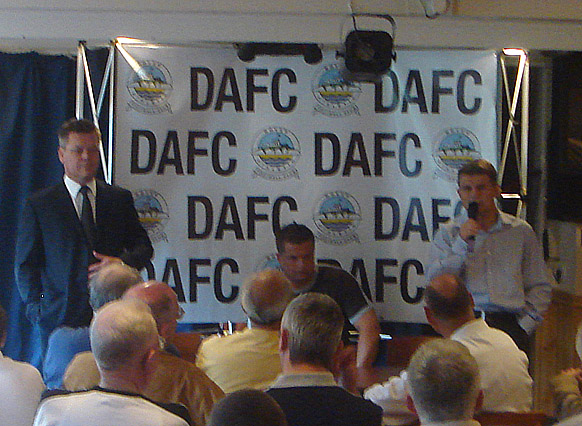 *BS*ANDY HESSENTHALER met fans for the first time at Crabble – and told them his team-building will be completed in time for the new season.

On top of that he has so far only signed midfielder Jon Wallis and himself – as well as securing the services of striker Jimmy Dryden for another season.

But Hess said: “We’re happy with the progress being made. I am not worried because we will have a good squad in place by August 18.

“Most of the squad will be built in July. I’ve got a lot of players coming down for pre-season, some coming on recommendation. I will be casting my eyes over those trailists before we make a decision on which ones we’ll be signing.

“All the lads we’re talking to are good players – so it is natural they will have options other than us.

“Jon and Frannie signing for us will certainly make us an attractive option – and then you’ve got myself and John Keister who have vast Football League experience.

“I want another centre forward, three defenders and a goalkeeper. They are priorities.”

A goalkeeper Hess has been talking to has a trial with Rotherham – but the Whites chief said: “A number of lads will go on trial with League clubs and some of them won’t be getting contracts, so we still have a chance of signing some of these.

“We’re putting as many feelers out as is possible – and things will eventually start taking shape. We’re happy with the way things are going.”

Meanwhile, Hess has been watching some DVDs of games last season, filmed by our cameraman David Shirley.

And he admitted: “The standard was a bit of a surprise. However, there were some positives – as well as negatives.

“Dover won most of the games I’ve seen so far – but there were a lot of scrappy games. But the lads on contract, James Rogers, Byron Walker, Matt Bourne and Clokey (Craig Cloke), are good young players with potential.

“I knew about Clokey already – but there was some good stuff from Byron and James too – so there’s some potential quality already here.

“Hopefully, I will be able to make them better players by working on a few things.”

Hess held a youth team meeting with coaches and managers before the meet-the-manager event.

He said: “We want to have some input with the youth and reserve system. Obviously, there’s only so much time we can dedicate to that area. However, we’ve chatted to coaches and going through a training video with them, on how we’d like to see things done.”

*Lpic1*Hess was greeted by around 300 fans, packed into the Centre Spot, and fielded questions, alongside chairman Jim Parmenter and assistant-boss Darren Hare, for more than a hour.

The Dover boss said: “It was great to meet the fans and answer some good questions. Hopefully, we can all work together to bring success back to this very good club.”