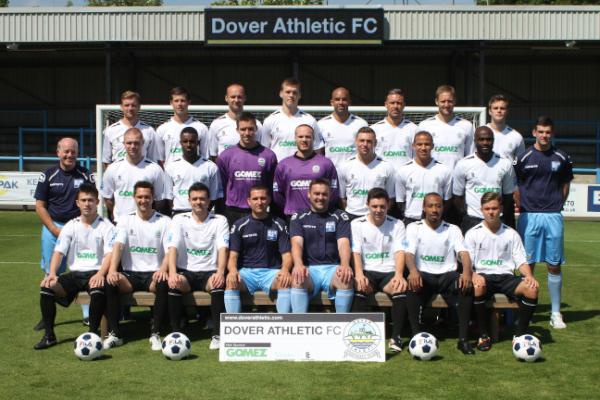 *BS*It is the football equivalent of Christmas Eve today, as Whites kick-off the league season at Crabble tomorrow.*BF*

“We want to win promotion and we have the squad here to do that”, says Nicky Forster.

Whites are second favourites with the bookmakers for the title but Welling boss Jamie Day has said the division is “the most open and competitive for years”.

Nicky Forster and his squad will be taking the football cliché of one game at a game, so let’s start with Farnborough on Saturday…

Team news is mixed for Dover. Goalkeeper Mitch Walker and winger Ricky Modeste are suspended for two and three games respectively from Saturday following red cards at the end of last season. Meanwhile, a couple of injury concerns may not clear up in time for this weekend but Forster should have at least 17 first-team players to select from.

Whites’ manager is confident in the squad he has assembled: “We’ve made lots of additions this summer and we will get better and better as the season goes on.

“Eastleigh are the bookies favourites, then you have Sutton, Welling, Chelmsford and Basingstoke, not to mention any surprise packages.”

*Q1*Dover will need to stay patient and be creative when teams come to Crabble this season, believes Forster.

He said: “Farnborough will work hard, keep their shape and look to hit us on the break. We’re expected to get a result but the important thing is that we stay patient.

“Sometimes teams come here and sit back but Manchester United have that every week and they still win so it’s something we’ve got to deal with.

“I want us to be take teams on more this season and draw defenders out of position to free other players up.”

Farnborough will come to Crabble without summer signing Dave Tarpey. The striker joined from Hampton & Richmond, where he was top-scorer last season, but sustained an ankle injury at training on Tuesday.
*Lpic1*
Boro boss Spencer Day said: “It’s a massive blow to us because Tarps has been sensational in pre-season and will prove to be a big player for us. Anyone who scores 20+ goals in this league for a relegated side is going to be a big miss.”

However, Day has a new centre forward to turn to in Jacek Magdzinski. The Polish striker left Crabble two weeks ago after a pre-season trial. Fellow Pole Michal Steinke, a defender, has also joined the Hampshire club.

Day commented: “They are two physical lads who have impressed me and are keen to play. Jacek has been training with Dover so he’s really looking forward to Saturday’s match.”