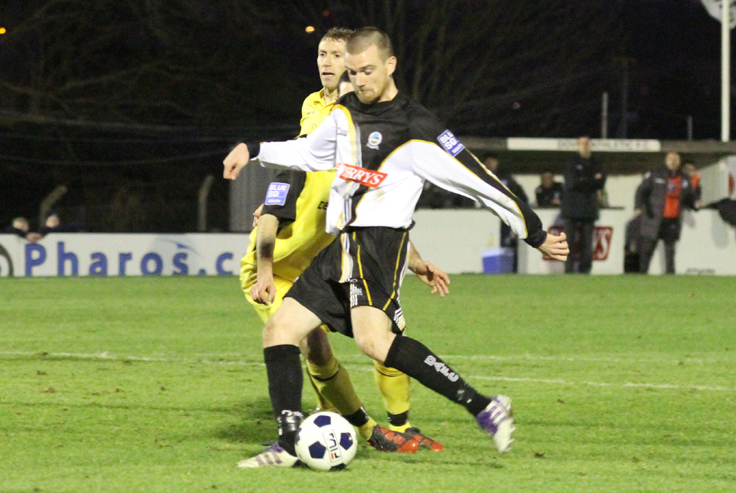 *BS*In the town of Sligo, which sits on the North West coast of Ireland, there’s only one kind of football – the Gaelic kind. However growing up in the town Dover midfielder Barry Cogan only had eyes for what was known locally as soccer.*BF*

To get his footballing aspirations off the ground he knew he had to move away from the sleepy surroundings he’d grown up in. At the age of 12 he managed to hit this first rung of ladder and was scouted for a team called Belvedere in Dublin.

After spending two years with the club Barry was offered an unbelievable chance to come and play football in England for a short time. The interested party where Championship outfit, Millwall who offered him an initial week long trial and then a months spell that summer. After impressing in both he was offered a contract by the club.

For the 15 year old Cogan this was nothing short of a dream come true. Upping sticks in an instant and moving on your own to a different country might sound like a daunting prospect for someone so young, but the change didn’t actually faze Barry much at all.

When he landed in England the hard work really began as Cogan had to adopt to a whole new lifestyle centred around optimising his physical performance on the pitch. Fitting into this new regime carried its own problems which eventually took its toll.

“When I first came over I was quite small and actually played as a winger, then like most I had a growth spurt which caused me lots of problems when it came to staying fit”.

*Ppic1*Putting his body under so much strain led to a range of injuries which plagued his crucial early years at the club.

“I was out for a whole year with a back injury and after that I couldn’t seem to finish a whole season without picking up more injuries. This all came at a time when I was trying to break into the team”.

Despite the set backs Barry managed to break into the first team in 2004 after four years of hard work. In his time there Barry enjoyed a number of highlights including winning several man of the match awards, playing Everton in the FA Cup and appearing in two UEFA Cup matches.

But for Barry there is one moment that stands above the rest, taking on his favourite club Manchester United in the 2004 FA Cup Final at the Millennium Stadium. Barry made his appearance in the 74th minute, replacing fellow countryman Robbie Ryan, in the first substitution of the final.

Although he admits he didn’t really have a chance to take the whole occasion in, Barry still has a lot of clear memories of the day. “I was only 19 but I was still excited rather than nervous, everyone had come over from Ireland to watch the game which made things a little surreal really! But the whole build up to the day and the final itself was just an unbelievable experience”.

During Barry’s second season in the first team Millwall went through a rocky period which led to a very unsettling time at the club. “It was a time when the club was going through a lot of changes, we had four managers in one season and then the next summer they brought in 17 new players”.

The sudden influx of players had a drastic effect on the amount of first team football that was available to everyone at the club and Barry started to look elsewhere for opportunities to play more regularly.

Just before the start of the 2006 season he was given the opportunity to sign for League Two side Barnet, a chance that he jumped at. “Although I only spent a year at Barnet it was actually a really good time for me, I made 46 appearances that season and just enjoyed being part of a solid team”.

The following summer he was offered the opportunity to move up to League One and play under Ronnie Jepson at Gillingham but the manager resigned just six weeks into the new season and was replaced by Mark Stimson. The new appointment led to a huge reshuffle at the club which didn’t provide a good platform for stable performances. “It was a very difficult time to play at the club with so many players coming and going, plus I have to admit that personally I didn’t have a great season”.

With relegation beckoning and with only 21 appearances under his belt Barry went out on loan to Blue Square Premier side Grays Athletic for a month. Despite the financial difficulties at the club, which saw players taking large pay cuts, Cogan flourished and capped off a successful season as the club’s top goalscorer in all competitions.

*Lpic1*This form didn’t go unnoticed and during the season Grays received a number of offers from Crawley Town manager Steve Evans. Grays managed to keep Barry during the season but when the summer came around he was released and soon joined the Red Devils.

Cogan joined Crawley and enjoyed a fruitful first season. However, unbeknown to Barry, history was about to repeat itself. “I’d had a good season but then in the summer the club had a huge injection of money and brought in a lot of new players. Competition for places suddenly got very tough and I’m not one to sit around on the bench, I just don’t enjoy it”.

In a bold move Barry arranged a meeting with the Crawley boss and asked to be released by the club. It was at this point, when Barry was looking for a new club, that he happened to speak to an old friend of his, Adam Birchall. Things moved quickly from this point and he made his debut in November 2010.

Cogan admits that he didn’t really know what to expect when he moved, “I’d never played in Conference South before but I was impressed with the club’s professionalism and the way that everything was run from the top down”.

“I thought it was going to be difficult going part time but I actually really enjoy it, it’s really helped bring back my hunger to play football”.

Driven by the simple prospect of playing first team football Barry sees his energy and work rate as key strengths and is now working on finding the net a few more times before the end of the season, which could make all the difference.