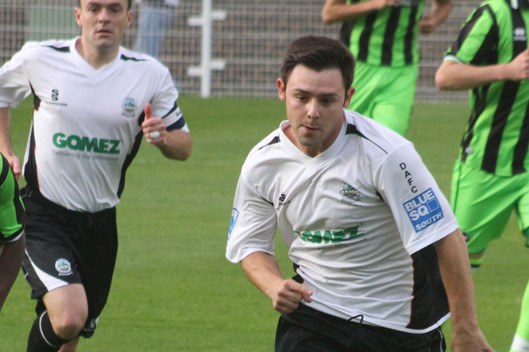 *BS*Dover Athletic have signed winger Jamie Smith after a successful trial. The 22 year-old has impressed Nicky Forster, who knows him from their days at Brighton & Hove Albion.*BF*

Jamie joins the club after leaving Leyton Orient at the end of last season. Prior to that he spent three years at Brighton, where he made 10 appearances for the first team.

The skilful Londoner has looked comfortable on both wings in the opening friendlies against Deal and Brighton, adding extra creativity to Forster’s revamped midfield.

Nicky said: “I know Jamie from our Brighton days and he has done well. Nobody is guaranteed a place in the team but he’ll strengthen us.”

The Dover boss now has a squad of 19 players, plus a group of talented Academy prospects who are taking their pre-season opportunity to shine.

Smith becomes the second winger to sign this summer after Ricky Modeste came in from Chelmsford City. There is a possibility of a third winger joining the club, as Whites’ boss expects to see a trialist in action at Lewes on Saturday.