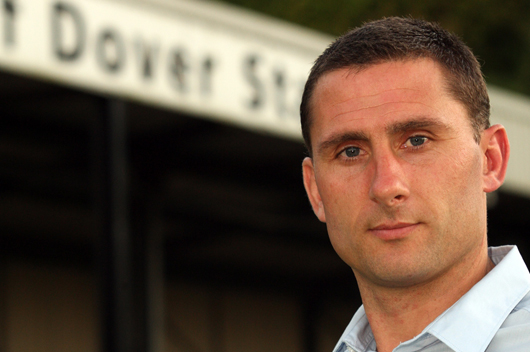 *BS*Manager Nicky Forster’s first blog for doverathletic.com focuses on Saturday’s performance against Eastleigh, plus news of another Forster starting to make his name in the game:*BF*

I was delighted with the boys performance on Saturday against Eastleigh, a team in good form at present.

Even without the early goal I thought we dominated the initial exchanges and set the tempo for the remainder of the game.

Obviously the game was marred by a serious injury sustained to their forward, Jamie Slabber. Although there is no doubt that Corcs caught him I also feel that both players went into the tackle with whole-hearted commitment to win the ball and without intention to harm.

The tackle itself was one of maybe five or six heavy challenges in the first half which made for a really feisty yet fair encounter. I must add that I was impressed with the way my boys responded to the game after that point. There is often a tendency for the game to go flat after such an incident and yet we still had the focus and desire to go on and win the game comfortably.

I’m sure that the shape of the table will continue to change as teams jostle for positions but I feel we are now a team with the belief that a play-off finish is a realistic target and one we as a group are focussing on.
*Lpic1*
Away from Dover, last week my stepson Jake made his full debut for Brighton & Hove Albion in their home game against Southampton. It wasn’t until after our game against Eastbourne Borough that I looked at my phone to see numerous messages saying that not only had Jake scored but he had also won the Man of the Match award too.

And before you ask he’s not interested at this stage in a loan move to Crabble, as this was the first thing I asked when returning home. (I’m not convinced he would get in our team at present anyway!!!)