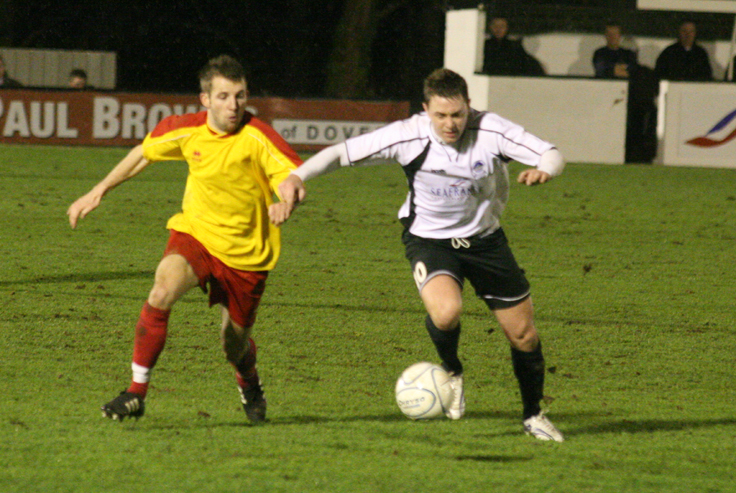 *BF*The striker, who has been a big hit with the River End faithful since signing from Gillingham last summer, did not hesitate in agreeing to commit his immediate future to the club.

Whites boss Andy Hessenthaler said: “Frannie is a great player and we are delighted he has signed a new deal.

“He always was going to sign for us. The lad is class and we’ve promised not to stand in his way if a Football League club comes in. We’re hopefully going for another promotion and Frannie is a key part of our plans.”

Meanwhile, striker Jimmy Dryden has not yet agreed to sign a new deal at the club.

Dover Athletic, mindful of the player’s long-term knee problem, have added a clause to the contract covering the club in the event of any further injury flaring up.

Hess has given Jimmy until the end of next week to make his mind up.

The Whites boss said: “He didn’t miss any games during the past season with the problem, but his knee does have a weakness and the club must cover itself in the event of any further problems.

“We’ve made Jimmy an offer and he has not made a decison yet. Unfortunately, we have to know one way or the other very soon because I’ve got to think about the squad for next season.

“If Jimmy wants to be part of our squad, the offer is open, but if he doesn’t, then we have to move on and get someone else in. We’ll certainly need to know by next week. We cannot wait forever. Hopefully, he’ll sign because Jimmy has had a good season for this football club and he’s in my plans.”

Hess has made offers to four potential new signings and is waiting for answers. The Whites boss also said he will be looking to sign a new keeper to compete with John Whitehouse for the No1 position.

Home friendlies have also been confirmed with Charlton (July 12), Dagenham (July 19), Folkestone (July 22), Gillingham (July 29), Crystal Palace (Aug 5). Hess takes a team to Whitstable on August 9 and there is a spare date for a further match on August 2.