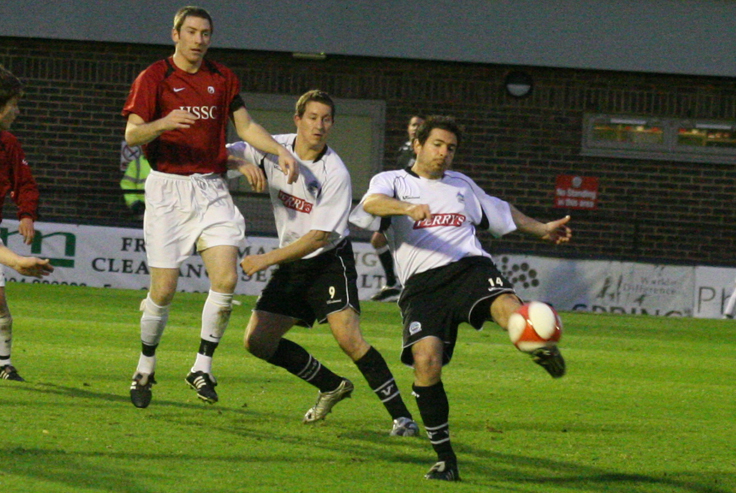 *BS*ANDY HESSENTHALER has a selection headache up front this weekend.

*BF*Shaun Welford is suspended – and Giuliano Grazioli is available after suffering concussion while Nathan Bailey staked a claim with two goals in Whites’ 4-1 Ryman Cup win against Canvey Island on Tuesday.

Hess admits he has to make a tough decision for the trip to Harrow Borough on Saturday,

He said: “Nathan has done his chances no harm with his performance and goals, which I’m sure will give him much more confidence.

“And Graz is back in the frame – and he played really well when he came on at Wealdstone the other week.

“He has been unlucky with a couple of injuries and the fact that Frannie Collin and Shaun Welford have been playing so well for us up front.

“But with Shaun suspended, there is now a place up for grabs – and I’ve got a bit of a headache in deciding on how we’re going to line up – but, with competition for places so intense, it’s a nice problem to have.”

The Whites gaffer was pleased with the second-half performance on Tuesday with his mix-and-match side.

But he admitted: “I wasn’t happy at half time. We weren’t passing the ball well or reaching the performance levels I expect of us. Credit to the lads, because in the second half they played very well and there were some good plus points to come out of the game.”

Whites are being branded dead certs for the Premier Division title by a number of pundits, but Hessenthaler is having none of that talk.

He is only too aware that fortunes in football can always change quickly – and a couple of below-par performances and results will let back in the chasing pack.

The gaffer added: “No way can we take our foot off the gas. I know it’s a cliché, we all say it, but we’ve just got to take each game as it comes. Always concentrate on our next match – and look to win.

“That’s what we’ve got to continue doing.”