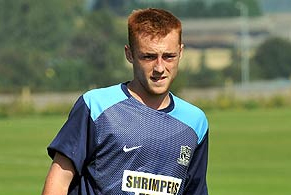 *BF*The Shrimpers rookie, 18, has already made seven first-team appearances for the Essex club – and joins the Whites on an initial one-month loan deal.

Crawford goes straight into the Dover Athletic squad, which travels to Lewes on Saturday.

Hayes said “Harry has good pedigree. Southend have a good track record of producing good young players and this lad is highly thought of at Roots Hall.

“We’ve got him initially for four weeks but there maybe scope to extend that”.