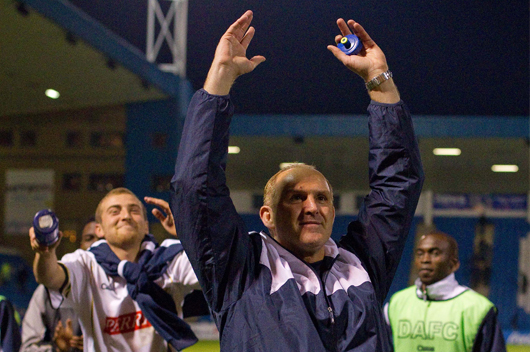 *BS*MARTIN HAYES says his Dover team will be up for tonight’s Blue Square South derby with Dartford.

And while Dover made club history by beating Kent’s only Football League club Gillingham in their own back yard, the Darts also got an impressive draw with Port Vale.

Everyone was in dreamland after the 2-0 win at Priestfield – and the match against Dartford to many almost seems a side-show. But boss Hayes is having none of that – and believes the fact the game is another Kent derby makes it yet another juicy clash.

He said: “Had it been away to a team that gets about 300 fans on a wet Tuesday night, it would be a big anti-climax. But playing against Dartford is a big match – another derby and important because it gives us a chance to make up some ground on the teams above us in the division.

“We are only just getting over Saturday to be honest – and beating the Gills at their place is one of the highest points of my football career.

“It was our very best chance to beat them at the weekend because they’re not in good form – so we went there to attack and get our noses in front, which is what happened.

“I didn’t want to go there and give them an opportunity to get into the game – and the timing was just perfect for us.

“They have good players there who are off form and not performing – so it was vital we cashed in on that.

“The atmosphere was amazing and I’m just glad that those thousands of Dover fans have something that will long live in the memory.”

Gillingham boss Andy Hessenthaler was gracious in defeat – and said: “Dover deserved the win. I’m absolutely gutted – but I take satisfaction in knowing that some of the players that made it happen for Dover were players I signed.

“I hope Dover progress to the third round – and win their league. They are a great club.”