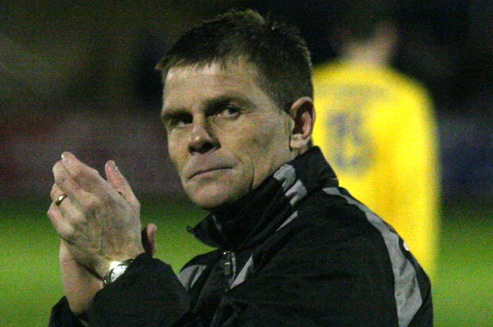 *BF*The Whites boss has had a stunning three years at Crabble – guiding the club to two league titles and a Blue Square South runners-up spot in successive seasons.

Hess will go down as one of the most successful managers in Dover’s history and will be a tough act to follow.

Chairman Jim Parmenter told doverathletic.com this morning: “We had a very amicable meeting yesterday where we discussed his future at the club in light of the approach from Gillingham.

“We agreed that it was in Dover Athletic’s interest – and his – that we had a swift outcome to this as any uncertainty is not good.

“Andy agreed and slept on it overnight – and he decided it was in the best interests of all concerned that he moves on.

“I place on record our gratitude to Andy. His achievements at this club have been nothing short of amazing.

“He goes with our very best wishes and I would like to say that he has acted very professionally in all my dealings with him. It’s been a pleasure to work with Andy.”

Hess admitted it has been a very tough week and that he was leaving the club with incredible memories.

He said: “I’m leaving with a very heavy heart. I’m not exaggerating when I say that I’ve not had much sleep these past few days. I’ve had to put a lot of thought into this decision because my time at Dover Athletic has been amazing.

“From the day I walked in, I’ve had a great relationship with the chairman, the board and all the fans, who have been first class to me.

“Together we’ve achieved so much – and the five-year plan of getting this club back into the Blue Square Premier has not finished because I’m leaving.

“Whoever comes in, he will have another two years to finish the job – and that is going to happen because Dover Athletic have that ambition and the chairman is backing that.

“I hope fans understand that I’ve always been clear that if I had the chance to take a job in the Football League, I’d like the opportunity to go for it.

“And wherever I eventually end up during my managerial career my relationship with Dover Athletic and the chairman remains very good. I will always be a friend off-the-pitch to Jim Parmenter and the club … as well as in the football business too.

“I will always help DAFC in any way I can.”

Dover Athletic hope to appoint a new manager quickly and the Whites chairman says he is talking to one candidate within the next 24 hours.

He said: “I’ve already had CVs sent to me and taken a couple of calls. We’ll be looking to get an experienced top manager in place very quickly.”