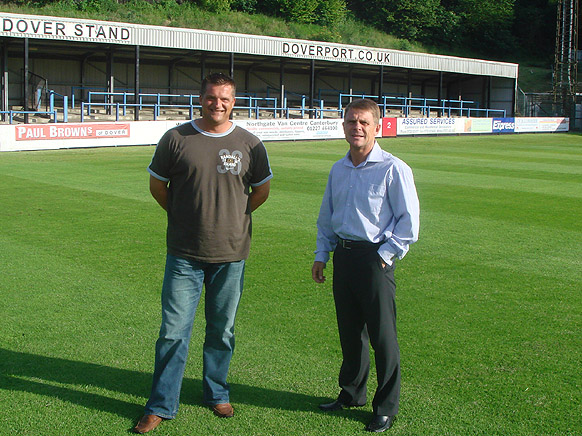 *BS*ANDY HESSENTHALER and his No 2 Darren Hare will put the Dover squad through their paces for the first time tonight – and cast their eyes over a number of trailists.

*BF*The Whites player-boss, back from his summer holiday this week, cannot wait to get cracking on plotting a way out of Ryman One this season.

He said: “It’s great to get back down to training again. There’s going to be a lot of players coming down too on trial. Things are progressing well with our plans for next season.

“We need another six players – but, of course, need to balance that out with the need to stay within the club’s playing budget.

“We had some good players in the squad already and added quality to that – and now we just can’t wait to put the final bits of the jigsaw in place before getting to the job at hand.”

Hess confirmed the club are considering to make a bid to a Ryman Premier club for a central defender, who is currently transfer listed. Dover Athletic will not be going public on the identity of the player because he is under contract.

But the Whites player-boss said: “He’s a player who I’ve had good reports about for the past year or so. We’re hoping to make a bid but we’re not going to pay silly money – but he’s a player we would like. He’s a centre-half but it’s all going to come down to money, so we’ll have to wait and see.”

Full audio interview with Andy Hessenthaler is available on our DAFCradio platform.