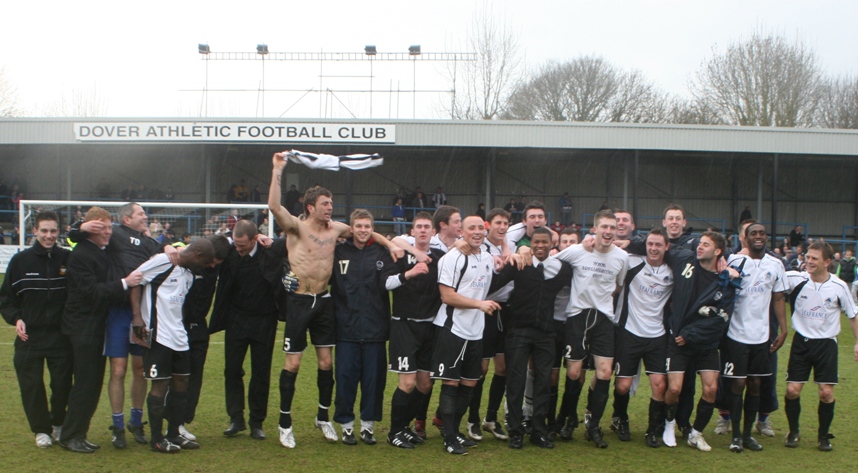 *BS*ANDY HESSENTHALER ranked clinching the Ryman One South title at Dover along with his high of gaining promotion to the Championship with Gillingham at Wembley Stadium.

*BF*The jubilant Dover boss saw his men beat Burgess Hill 1-0, courtesy of Jimmy Dryden’s second-half header, which sealed the title and with it promotion to the Premier Division in his first season in charge.

He told DAFCtv exclusively on the pitch at the full-time whistle: “I’m delighted. I’ve had great times, and some lows, and it’s up there with the best. I’ve lost and won at Wembley and this is right up there.

“I’m not just delighted for the players but everyone at the club, the fans, the chairman, the tea ladies, everyone.

“The chairman (Jim Parmenter) has put a lot of money into this club and wants to get it back to where it should be – and this is the first part of that journey.

“Darren Hare, my assistant, has been fantastic. If it wasn’t for him, we’d not have got this promotion. Everyone deserves this – it’s been a long time coming.”

*Lpic1*He also was chuffed for local boy Dryden, who had the honour of sealing the championship by nodding in a superb cross from Matt Fish.

Hess added: “If someone is going to score a goal for this football club, it’s Jimmy. I am delighted for him.”

Jim Parmenter could barely watch the final 10 minutes, he was so tense. He said: “What a fantastic day. That’s 15 years since we won anything. We’re slowly getting the club back from the dead almost. We’ve won the league, got a new clubhouse coming and other improvements to the ground. Dover Athletic is back and I’m relieved.

“We’ve got a special club with a special team and a special manager. We’re back and thanks to everyone for sticking by us.”

Assistant boss Darren Hare said: “I’m so proud of the team. I’ve not worked with such a professional group of players.

“Next season is going to be a different challenge. There is going to be better footballing sides in the Premier but it’s a challenge me and the gaffer are looking forward to.”